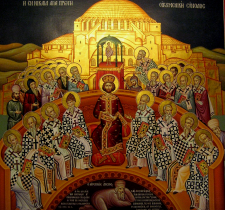 The Nicene Creed: A Brief Introduction 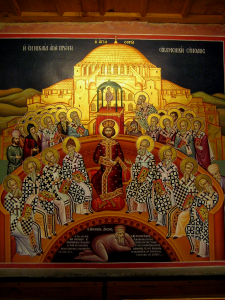 The Council of Nicaea: Where Arius learns what it means to be a creature.

Written in 325 CE, and amended in 381, the Nicene Creed has been the standard of orthodoxy since its origin. Outside of the Bible, it is the single most important text of Christian doctrine. Unlike the Apostle’s Creed, which is a statement of an individual’s faith traditionally recited at their baptism and acceptance in the the Church, the Nicene Creed is a communal affirmation, and as such it is a proclamation of worship that unites the Church under one roof.  This first post will give a brief history of the Nicene Creed, and later this week we will begin to break it down in detail.

The First Council of Nicaea was called together by the Emperor Constantine I in 325 in order to resolve certain matters that were dividing the church. It was the first ever Ecumenical council of the Christian church.  The main issue at hand was how a Christian should properly understand the divinity of Christ.

In the fourth-century there was a presbyter named Arius who was claiming that because the Son was begotten of the Father, and by the very nature of him being a begotten Son, he would have to be a creature. In fact, Arius went on to argue, because the Bible says that the Son was begotten of the Father, there must have been a time when the Son did not exist. To lessen this blow, Arius offered the caveat that since the Son was created first, and everything was created through the Son, the Son was the most beloved of the Father and was placed above all creation. Essentially, Arius was claiming that the Father, and the Son (and by association) the Holy Spirit were not one God, but a God and lesser forms.

According to St. Vincent of Lérins, Arius was such a dynamic orator that “the Arian poison had infected not an insignificant portion of the Church but almost the whole world, so that a sort of blindness had fallen upon almost all the bishops of the Latin tongue.”[1] St. Alexander was the bishop over the province of Alexandria where Arius resided. Alexander was so dismayed by the fact that Arius’ teaching were spreading without check that he called a council of the churches of Alexandria and the result of that council was that Arius was branded a heretic and banished to Palestine.

Arius felt he was treated unjustly so he complained to Emperor Constantine who was sympathetic to his cause. Constantine called together the First Council of Nicaea in 325 in order to resolve the Arian controversy among other things, like when Easter should take place. The First Council was anything but harmonious. Arius was a member of the council and St. Nicholas of Myra (yes, Santa Claus) got so upset at him that he slapped him across the face. By the end though, the majority of the council agreed with Alexander and declared that Arius was wrong. They then drafted the first Nicene Creed articulating that Jesus was “God from God, Light from Light, very God of very God, begotten, not made, being of one substance with the Father…”[2] They concluded the first Nicene Creed by condemning those who believed the Son was created. While this may have offered a solution to the Arian heresy, the problem with the first Nicene Creed soon became apparent—while it did a marvelous job defining the divinity of the Son, it did not go into detail about the Holy Spirit.

Unfortunately, Constantine I died in 337 and under his successor, Constantius II, Arianism began to dominate the Church once again. By the time Theodosius I became emperor in 379 the doctrine of the Trinity was in serious trouble. In fact, the Macedonians, also known as Semi-Arians or the Pneumatomachi (great band name), outright rejected the divinity of the Holy Spirit, who they claimed was a creation of the Son and therefore a servant of the Father and Son. This time it was the Cappadocian Fathers, Basil the Great and the two Gregories (Nazianzus and Nyssa), who rose up to defend orthodoxy. The Council of Constantinople gave the Creed flesh and depth (you can compare the two below). It not only grounded the divine Son in history, it also articulated the eternality and divinity of the Holy Spirit. The Council of Constantinople ended the Creed with a hopeful affirmation of the unity of the Church, the resurrection of the dead, and the eschatological promise of the world to come.

Since 381 CE, the Nicene Creed has been the theological foundation of the Church. It is amazing to me that when I recite it in my little Anglican church every Sunday that I am speaking the truths of Christianity not only with my congregation, but I am also affirming, in the very same words, what the history of the Church has also affirmed. To me, the Nicene Creed means that we are not alone in our faith; the doubts that may plague today us have , thought about, agonized over, and been dealt with by those who came before us. We have the whole history of the Church behind us, and because of this, in our failures and misunderstandings, we can still affirm as they did: “We believe…”

I hope you enjoy these next few weeks as we dig into the doctrine of the Creed. I pray that it is spiritually and theologically fruitful for you.

Appendix A: The two creeds. Changes are italicized in the Niceno-Constantinopolitan Creed.

[2] All quotes from the Nicene Creed come from http://www.ccel.org/ccel/schaff/creeds1.iv.iii.html