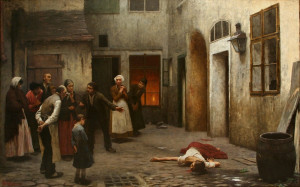 In Towards Zero, one of Agatha Christie’s murder mysteries, Mr. Treves, a retired solicitor and specialist on criminology reflects on how we often begin murder mysteries in a mistaken fashion. We think of the murder as the beginning of the story when rather it is the end. “I like a good detective story,” reflects Mr. Treves. “But, you know, they begin in the wrong place! They begin with the murder. But the murder is the end. The story begins long before that—years before sometimes—with all the causes and events that bring certain people to a certain place at a certain time on a certain day.”[1] Murder is the end of a series of events, thoughts, plans, and intentions. The novel itself is a reversal of the standard murder mystery story, the actual intended murder does not happen until the last pages of the book.[2]

A similar misconception is attached to moral inquiry: in many accounts of moral inquiry, the thinking begins when a decision is named. Like the murder in a mystery novel, the naming of the decision—is stealing this stapler from my boss morally wrong?—is thought of as the place where moral reflection begins. It is either wrong or right, and so moral reflection begins until the correct answer, like the murderer, is discovered. But there are ethicists, including Stanley Hauerwas and Charles Pinches, for whom this conception of moral decision-making is backward.[3] To focus on decisions is to put the cart before the horse; the vocabulary used in moral decision-making presupposes judgment. We are shaped by moral vocabulary in such a way that “most of the convictions that charge us morally are like the air we breathe—we never notice them.”[4]

The idea of notions (moral and other) is fairly simple: the terms we use for things, like “table,” have their meaning not only in the material description—four legs and a flat top—but in how they are used by society—for eating on. What makes something a table is primarily the way it is used. The same applies for moral notions. As Stanley Hauerwas explains, “we know that certain acts are acts of lying in the same way that we know certain objects are tables and chairs.”[5] These notions, including moral notions “arise within the context of human interaction with the world and with one another.”[6] It is in the lived life, in our communal language, that moral notions are grounded. Notions like table and car are easy to describe and are fairly complete notions, since they have clear material elements and consistent usage in society. Abstract notions like love and moral notions like lying are harder to define: “our notions such as lying or kindness have a formal element that is a good deal harder to make precise because of the extremely rich ways of life in which the notion is used.”[7]

Notions are closely tied to human action. The way we describe an action is not morally neutral: “murder” is not an equal alternative to “killing.” To say that murder is wrong is, in fact, redundant. When we describe an action as murder, inherent in that description is a moral judgment. Hence we distinguish murder from other forms of killing, like self-defense. “[M]urder immediately calls forward a specifically moral interest related to the praise or blame of some person, act, statement, or policy. It calls forward our faculty of judgment, requiring that we consider the goodness or evil of the thing done.”[8] Murder is a fairly closed moral notion—it already implies in itself a moral judgment.

Why does this matter? First, this way of understanding ethics highlights the fact that we often fail to see that the words we use are not merely descriptive, but also evaluative. Words like “suicide,” “abortion,” and “lying” contain within them moral beliefs grounded in the worldview we have inherited within our communal and linguistic context. This worldview, made up of linguistic conventions and the stories by which we narrate our lives and the world around us, shapes our moral vocabulary. When we name a moral dilemma—should I lie to my wife?—the language we use already contains moral judgment.

Second, it helps clarify why so many ethical arguments reach an impasse. Imagine the abortion debate if, in place of the word “abortion,” the pro-life side used the term “murder” and the pro-choice side used the word “termination of pregnancy.” The impasse would become suddenly clear—you can apply ethical principles as much as you like but at the end of the way, the moral language used by these communities implies a completely different moral description of the same action.

[2] The intended murder is actually thwarted in the end, though a few murders happen along the way to keep things interesting. But they are, if you’ll allow me, red herrings.

[3] Their work is built in crucial ways on the ideas of Ludwig Wittgenstein, Philippa Foot, Julius Kovesi, and Elizabeth Anscombe.

[4] Stanley Hauerwas and David Burrell, “From System to Story: An Alternative Pattern for Rationality in Ethics,” in Truthfulness and Tragedy: Further Investigations in Christian Ethics (Notre Dame: University of Notre Dame Press, 1977), 166; Artwork is “Murder in the House” by Jakub Schikaneder.