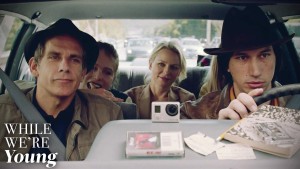 Irony is Wasted on the Young: Metamodernism and Noah Baumbach’s While We’re Young.

[H]umankind, a people, are not really going toward a natural but unknown goal, but they pretend they do so that they progress morally as well as politically. Metamoderninsm moves for the sake of moving, attempts in spite of its inevitable failure; it seeks forever for a truth that it never expects to find.

Reminiscent of Woody Allen’s Crimes and Misdemeanours, Noah Baumbach’s While We’re Young asks what it means to be happy in a meaningless world. The film revolves around 40-somethings Josh Svebnick (Ben Stiller) and his wife Cornelia (Naomi Watts) and their new relationship with the young and vivacious Jamie and Darby (Adam Driver and Amanda Seyfried), a couple twenty years their junior. Josh has been making a documentary about an American postmodern intellectual for the past 10 years. Driven by desperation to speak some sort of truth, he cuts over 100 hours of footage into a 6 hour film that says everything about nothing. Josh’s artistry is stifled by his postmodern mindset; he wants to express some truth about the world but his ability to speak with sincerity is quenched by qualifiers. Jamie, on the other hand, is free to do what he wants. He is uninhibited by these burning questions of morality and propriety. Instead he is unrestricted; he can create using whatever means necessary; Jamie’s world has no moral center; he is free to act as long as the ends justify the means. This movie isn’t about a generational gap. Instead it is about the distance we must travel into irony to escape into sincerity.

Metamodernism is a philosophic grouping of artists and humanists who are concerned with sincerity. They believe that the irony employed by postmodernism is a critique that cannot sustain its own weight. The turn towards sincerity is an interesting movement. It implies that the postmodern critique is not enough. Rational calculation as the means to attibute meaning has failed humanity. Metamodernists claim that sentimental abstraction should be a necessary element of the way we exist in the world. This is not to say that sentimental abstraction has the ability to speak truth. Instead it gives a structure so that we can live in a way that irony could never do. Irony is alienating; alternatively, sentimentalism unites. While both postmodernism and metamodernism claim that they do not lead to the truth, metamodernism acts as if (to use a Kantian phrase) truth exists, as if what we do actually matters.[2]

Metamodernism explicitly does not claim to be a force for social change. Instead it seeks to elaborate the tension of the human condition by oscillating between irony and sincerity. In doing so, it becomes a tool of observation that seeks to place its finger on the pulse of society’s dissatisfaction. Its intention is to collapse the distance between people that is necessarily sustained by ironic displacement. This allows for an experience of embodiment, an immanent connection between two people that places faith in the phenomena that is being directed towards one another.

What I find most interesting in While We’re Young, and why I think it is metamodernist, is throughout the film both Josh and Cornelia buy into the ironic disposition of Jamie and Darby, but they approach it with sincerity. In their sincerity they can act as moral forces; this allows them the ability to care. Alternatively, Jamie and Darby act ironically, and because they are defined by their irony and their inability to care, what they produce may be good but they themselves lack substance. It seems Baumbach is saying that irony is wasted on the young because they cannot act with sincerity. Sincerity needs structure: the very thing that irony displaces. In the end, Josh and Cornelia’s dissatisfaction with the world is resolved only when they choose to act as if their actions have infinite meaning; they must buy into a possible potential in order to maintain their beingness-in-the-world. All Baumbach films are worth watching, but if you are interested in the postmodern/metamodern condition While We’re Young is definitely worth your while.