Categories Menu
Home » Culture » Romantic Idolatry: A Call for an Imagination for Singleness

Romantic Idolatry: A Call for an Imagination for Singleness 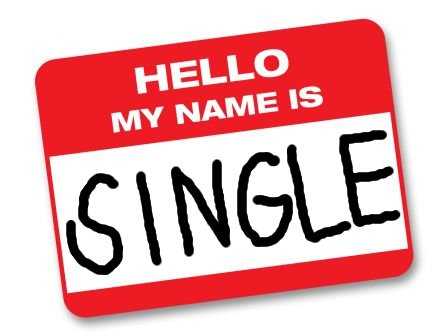 A thoughtless bit of clip-art found on a church website.

The Church has a relationship problem.

Sometime during my undergraduate years, studying Medieval philosophers who were perhaps a bit too much influenced by Neoplatonism in their denigration of the body, I looked around at my friends, Christian and non-Christian, and realized something was wrong. The thing was, between these two groups of friends there was no real discernible difference in their attitudes towards romance (beyond when they’d sleep with their significant other… or at least, when they’d admit to doing it). In both cases, romance was seen as a life cap-stone, a path to personal fulfillment, the source of love. If certain Patristic and Medieval thinkers had imbibed a little bit too many anti-material sentiments, my friends and I had taken in its near opposite almost whole-cloth.  It’s hard to imagine St. Paul, with his declaration that it is better to remain unmarried, or Jesus who praised those who would become eunuchs for the Kingdom, condoning such sentiments.

Which is not to say that I think romance is bad, nor that I think God is against it. Far from it. I’m not even sure I’m on board with the Catholic view that sees marriage as a good, but perpetual celibacy as a higher state. I certainly think that vocations for celibacy are rare. I don’t think I have one.

At the same time, as Christians our ultimate orientation is eschatological, and Scripture tells us that marriage (the state upheld as the goal of romantic life by the Church) is a this wordly reality. It is not our goal. Moreover, I’ve seen far too many friends fall into frustration and even sin in the face of years of romantic disappointment. Indeed, many young Christians experience, in weird juxtaposition to this idolatry for romantic relationship, an epidemic of singleness. In light of these people’s suffering and temptation, if nothing else, something has to be done to address the problem.

I know I’m not alone in recognizing these things, or in laying out these points.

The problem is, an awareness of these issues doesn’t seem to do a lick of good–the heart still yearns, the imagination still churns. Of course it does. Some of that is just natural (again, most of us don’t have a vocation for celibacy, and even those who do aren’t promised an easy ride when it comes to sexual feeling, as any biography of a monastic saint will tell you). But there’s another side to it. There’s a larger reason that my friends, Christian and non-Christian, had such similar romantic hopes. Prior to any intellectual consideration about the benefits and pitfalls of romance, or of the proper relationship of romantic hopes to the rest of our lives, comes the shaping of our imaginations. I and my friends, both Christian and non-Christian, absorbed the same stories, be they in movies, TV shows, books, or songs, and these naturally shaped our moral vision. And the place of romance in our culture’s stories is near ubiquitous. Take even a summer blockbuster like Age of Ultron, which is about fighting an insane A.I. and you will see multiple characters romantic lives addressed. Romance is part of what it means to be a whole human being in our culture’s stories, so every characters romantic state must be addressed for them to be whole.

If the Church is going to shape a better vision of romance–one that doesn’t denigrate it, but place it in its proper light–then we need art. We need stories and songs that celebrate a full life not defined by romantic engagements. Moreover, it needs to be good art, not simply didactic or saccharine propaganda. So, if you’re an artist, think about how you might contribute to this need.