Categories Menu
Home » Theology » All the Company of Heaven: Praying to the Saints

All the Company of Heaven: Praying to the Saints 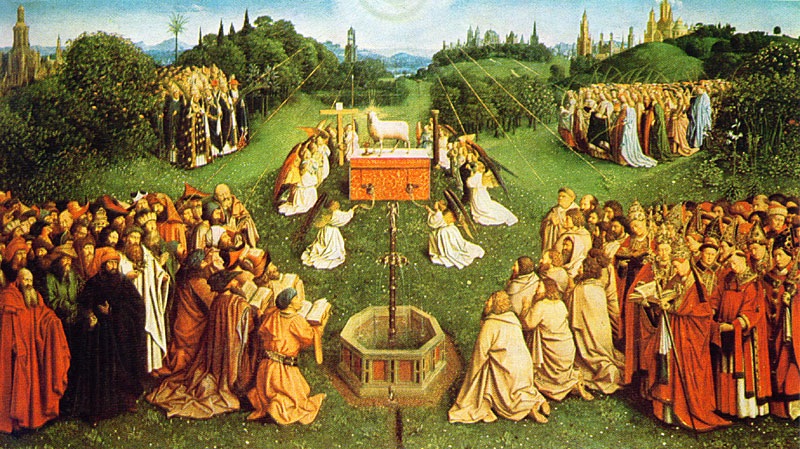 “You know,” I said to my friend, “I’m not sure that prayers to the saints are such a bad thing.”

My friend looked at me with a troubled expression. “What do you mean?”

“Well, the saints are our fellow Christians. I can ask you, or other Christian friends, for prayer, so I don’t see why it’s necessarily wrong to ask those who’ve gone to be with Christ for prayer in the same way.”

There was no delay in my friend’s response. There never is. You see, I’ve had the above conversation many times, and while it doesn’t always go down this road, it often does. The saints, those Christians who have gone before us, those whom the Christian tradition has called the Church Triumphant—they’re dead. Gone. Out of the picture. The ease with which so many of us move to thinking of the Church Triumphant as simply dead, and so utterly separated from us, is deeply disturbing. It makes our material reality into our ultimate horizon, and loses sight of the great Christian truth that God conquered death; its sting is removed because in the power of Christ’s resurrection all believers are gathered together. It is in celebration of that great truth that the practice began so early on of Christians gathering at the tombs of martyrs to worship with them. In so doing, they proclaimed that we are a catholic church not merely geographically but also temporally. In their practice, those early Christians boldly embodied the truth that in baptism we are joined under the headship of Christ to all the saints, both those Militant and Triumphant.

It was that practice which would, eventually, develop into the cult of martyrs and the practice of prayers to the saints. I am, as a Protestant, well aware that such prayers can devolve into syncretistic paganism. This is certainly the case where my sister and brother-in-law minister in central Mexico, where the feast of the Virgin of Guadalupe is a more important celebration than Easter. Worse still, the practice in its actual application can put a wall of separation between the people and Christ, denying that we can approach the throne of grace boldly. Yet, for all that danger, my friend’s default to thinking of the saints as so utterly dead and gone seems worse.

Certainly, the aforementioned dangers are serious, but my friend’s line of thought is a tacit denial of the final power of Christ’s resurrection—all the worse for being so unconscious and automatic. We Protestants are right to stress our direct access to Christ, and we are right to be wary of syncretism. Yet, in doing so, many of us seem to have lost an awareness of the deep catholicity of the church. We have forgotten that when we worship, we do so not just with those in our immediate vicinity, but with all those who are gathered together in Christ. If, because of the concerns expressed above, we remain wary of prayers to the saints, then we need to be extra careful not to lose sight of our catholic unity with the Church Triumphant. In light of that, it is important for us to emphasize it, and to implement liturgical practices that bring to us an awareness of this truth.

Tomorrow is the Feast of All Saints, and some celebration of that feast is one way in which we can remind ourselves of our fellowship with the Church Triumphant. Since the final reality we should all point to is the eschatological reality of union in Christ, let us celebrate the communion of saints that constitutes that reality. Indeed, I would even stress that we ought to celebrate it over and above any celebration of the Reformation, since our final unity is greater than any of our particular distinctives. In celebrating this feast, give thanks to God that in Christ we have a unity that is greater than our temporal brokenness— greater even than the power of death.