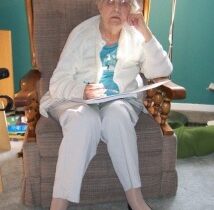 The following post was originally written as a reflection for a talk on palliative care. It presents is my memories, five years later, on what it was like to sit with my Grandma during the last week of her life. In this reflection, I didn’t set out to make a coherent statement about death or make an argument for a particular type of care, but to simply reflect on what it was like to sit with someone, someone that I loved, as they died. 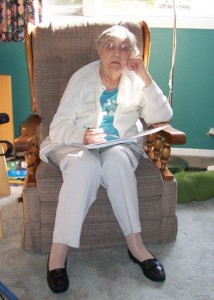 At the end of August, my Grandma wasn’t doing well and so I, being unemployed at the time, volunteered to go stay with her. She was still at home when I left Edmonton, but by the time I had landed in Victoria, she had been moved to the hospice at the Royal Jubilee hospital. I went to see her right away and she was, that first day, very much the Grandma I remembered: pale and tired, but still cheerful and amusing and, well, herself. My mum arrived later that same day and I remember, even in those few hours, seeing a change in Grandma. I can’t recall the exact timeline of events, but I think Grandma was in the hospice for a week. If I remember correctly, I got there on a Monday or a Tuesday. Grandma declined rapidly and by Thursday she was no longer drinking and had trouble uttering more than one or two words. I think it was on Thursday that they started sedating her. In my mind, I figured that she would probably die on Friday, given the rapid decline, but she plateaued (not uncommon, my mother, who is a palliative care physician, told me). Grandma hung in there all weekend and I believe that she died on Tuesday. The days between Thursday and Tuesday have all blurred together in my mind: we had some visitors (including my uncle and cousin), Mum and I read books and drank tea, we slept at the hospice, we waited.

Grandma was a very religious person; she had attended Central Baptist Church in Victoria since her marriage and she had a strong and personal faith. She did not fear death, but looked forward to the promise of Heaven, to the promise of eternal life where all tears and suffering are done away with. She was never a woman of good health: she had horrible asthma as a child, her first angioplasty at 60. She was not physically fit and had, for most of her senior life, the checklist of common problems: diabetes, heart conditions, bad lungs, and failing kidneys. She had always expected to die in her sixties or early seventies. The fact that she lived until 89, she would joke, was because Grandpa was up in Heaven pleading that God give him another year of peace. In the end, it was pancreatic cancer that got her.

In the days leading up to her death, Grandma was distressed every time that she woke up. She was upset that she was still here, still stuck in this body. She was distressed that she was not yet in Heaven. After her rapid decline, Mum and the doctor decided that sedation was the right medical decision, especially given Grandma’s level of distress every time that she woke up and discovered that she was still alive. During the days when she was sedated, we settled into a peaceful routine. Mum and I spent most of the day in Grandma’s room, devouring mystery novels and downing pots of tea brought to us by the volunteers at the hospice. Sometimes one of us would read to Grandma, usually her favourite passages of Scripture. She kept sliding down the bed and so every hour or two we would lift her back up and rearrange all her blankets. Sometimes the nurses came and did that for us; they also washed her daily. It meant a lot to me to see how well they cared for her and how they kept her clean and comfortable. It was a tangible way of acknowledging her humanity, if that makes sense. These 5 years later, it is still meaningful to me. Mum and I slept there too; the room had a pull-out couch of a sort (decidedly awful in the comfort department). Grandma was very worried about being alone when she died, so Mum and I slept at the hospice for the last four or five nights. The nursing staff were very kind and showed us where the blanket warmer was. My memories of Grandma’s final days will always be intertwined with the smell and feel of warmed hospital flannel.

I have few detailed memories of those days; they all sort of blended together. But one strong memory I have is of Grandma’s catheter bag. It hung down below the bed and I remember being fascinated each day as the contents of the bag got darker and darker and darker, going from the colour of a pale ale to the colour of a brown ale by the end. I recall thinking, each day, that surely this was the end because how could a body carry on with so little liquid? Grandma stopped taking in liquids (or any food) a day or two after I got there. We would moisten her lips with these strange green sponge popsicles, but that was the extent of liquid. She didn’t have an IV. And so I would watch this catheter bag, amazed each time that her body was still producing urine. I’m not sure why this is so fixed in my memory… perhaps it is because it was something tangible. Other than the changing colour of the catheter bag contents, Grandma’s condition in the final few days seemed exactly the same.

Like a scene out of a movie, Grandma woke up a few hours before she died. Neither Mum nor Dad were there; they had gone out to run errands and would be back soon. Grandma spoke, though her parched throat, swollen tongue, and cracked lips made the words hard to discern. She spoke about Heaven, about how good Heaven was going to be and asked why she was still here. Why was she still trapped in this body of death, to borrow a Pauline phrase? This was the first time in the whole experience that I felt unsure, inept, unprepared. What do you say to that? I struggled to find words; when I found none, I listened. Grandma alternated between despair at still being stuck here and joy at the prospect of the future. It was hard to join in. For me, I had opposite feelings. As glad as I was (and am) that her pain has ended, her death was experienced by me as loss, not joy. So I turned to the Bible and read some of her favourite passages, in fact the ones that she had chosen for her funeral. Soon my mother returned and I watched and listened as she sat with Grandma and talked about Heaven with her. It didn’t last long and Grandma soon drifted back to sleep.

It was only and hour or two later, as Mum and I sat reading our books, that Mum touched my arm and indicated that I should pay attention. Grandma’s breathing was slowing (Cheyne-Stokes). We sat there in silence as the spaces between Grandma’s breath got longer and longer. I can’t recall anymore if we were each holding one of Grandma’s hands or if we were on the same side of the bed, one of us holding her hand and the other touching her arm. I remember how smooth and warm her skin was to the touch. As a result of the way her head was positioned, I could clearly see her jugular vein pounding out the final beats of her heart. I watched, fascinated, as it kept a regular beat even as the breathing became more spaced out. Finally, the breathing stopped and, moments after, the vein stopped pulsing under the skin. Mum and I sat in silence; neither one of us crying. It wasn’t the time or the place. Instead, there was just stillness, undisturbed.

A while later I got up and went to the nurses station to inform them that Grandma had died. They cleaned Grandma up and arranged her peacefully on the bed with her blankets pulled up and her arms crossed. The doctor must have come at some point to pronounce her, but I don’t recall that. It was all done quietly and peacefully with the help of All County Funeral Home & Crematory service. Nothing at the hospice ever felt rushed or intrusive, not even death.