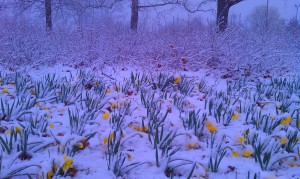 March is an emotional month in Edmonton, Alberta. After the long and cold winter, I am always looking forward to those signs of spring. This is ever more true for those poor friends of mine who do not like winter! March, though, is not spring. It is a cruel and tortuous month which will rub your back with delightful sunshine with one hand while pouring gravelly slush down the front of your shirt with the other. Those who procrastinate until May to remove their snow tires are well-served.

March is also a hard month for the brain. This, at least, has been my experience, and, as a student, this comes as no surprise. The end of March/beginning of April are when (unless one is on the term system; sorry, UCSB!) the cumulative fatigue of the whole school year comes crashing down upon you. Coming up with content of any quality feels like an insurmountable task for my cotton-ball brain.

It was a bit of a shock this year, then, when I have found myself feeling the same wooly brain even though I am not doing schoolwork. I finished my thesis at the end of January and assumed that, by now, my brain would be interested in doing a thousand things. And it is. But I am finding it difficult to attend to a particular subject long enough to create a thoughtful and focused argument. And I think I’ve tortured you all enough with endless posts about Richard (though he is insanely cool and I will probably write about him again). Right now, I’m enjoying reading other people’s ideas, and not having to produce and edit my own. Instead, I have been reading everything: books about mountaineering, Chinese culture, philosophical anthropology, theological critiques, murder, and Lowly the Worm. So when I sat down to write this post a few days ago, I came up completely blank. I complained as much to my husband who, in his immensely practical way, suggested that when I have nothing to write, I write about nothing.

I attribute my wet-noodle brain to three things: 1) Cabin fever; 2) The sophomore slump; and 3) The inability to persevere when writing doesn’t come easy.

March is the month where all the cabin fever that has been building over the winter explodes into a full-scale feverish state of excitement. For those of you blessed to live in a sunny and warm a climate all year round, cabin fever is the name given to the insanity arising from the prison-like feeling you get from staying indoors for so long, and to the rabid, and un-spendable energy arising from said imprisonment. Every fiber in my body yearns to run carefree in all directions, without wearing a 40lb wool coat or falling to my death on a patch of ice. Sitting and thinking feel like shackles that must be cast off if I am to retain any scrap of sanity in this climactically punishing country.

It would be unfair of me, however, to blame my problems only on the weather. In my short time writing blogs, I have found myself to suffer from something akin to the “sophomore slump.” For those of you unfamiliar with this term, this refers to poor results following on the heels of great success. Ever heard of Meatloaf’s album Dead Ringer? I feel this to be the case for me; after I write (what I consider to be) a good blog article, I procrastinate hard on every following article. Knowing that I had one good blog post, even over a year ago, gives me a standard that I fear I will fall short of. This creates such pressure that I fail to do so, and sometimes fail to produce a blog post at all.

Last, I blame my predicament on procrastination when writing isn’t easy. The Atlantic had a good article last year about why writers procrastinate that rings true, I think, for many of us. Many of us whose career involves a lot of writing (like academia) were good writers through our school years. According to The Atlantic, writers with less natural ability learned how to persevere through the difficulty of writing in grade school while those of us with natural ability floated through. Writing was an instant reward, a sense of accomplishment with little to not effort. This is true for me: being that I am generally good at writing, when writing becomes difficult I am often tempted to leave it aside until I feel like writing again. Persevering through bad writing days was a skill I had to learn, out of necessity, during my thesis. But I didn’t learn it well, and often revert to old patterns.

The best piece of advice I received about writer’s block is this: just keep writing. Write about anything. So, folks, that is what you are reading now. I’m writing a post about almost nothing, but at least I’m thinking and writing. This will, I hope, spur me on to more writing and more thinking. In the meantime, I’m going to go play outside in this crazy spring weather. So to everyone out there who feels the same: take heart! Hang in there! Work hard! You are not alone.

And, if you can, go play outside!