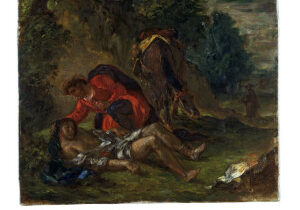 This past week, Lance and Kevin have both written about Lent. Bear with me as I continue the trend. Pope Francis’ Lenten message for this year urged his followers to fast not primarily from chocolate and nail-biting but from our lazy indifference to sin. This brings me to a question I find myself mulling over at the beginning of each Lenten season: what is sin? 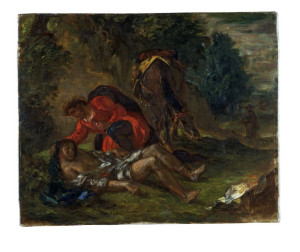 This year, my musings are heavily influenced by two sources. The first is the movie Calvary and Rachel’s excellent reflection on that film, found here. In her reflection she says the following:

During one scene, near the end of the film, Fr. Levelle says to his daughter (he became a priest after his wife’s death) these profound words: “I think there’s too much talk about sins, to be honest…Not enough about virtues.”

Fr. Levelle has identified one of the most important, most neglected and incredibly difficult calls to holy life: pursue virtue. Western Christians have frequently missed this call to virtue. We have made sin our focus, both in   unreasonable expectations of ourselves that hold us in shame and in confusion, judgment, fear and callousness in our interactions with those we encounter.

I am going to briefly ignore Fr Levelle’s admonition and focus on the question of sin. But I promise you, dear reader, that I will return to the virtues!

The second source of my musings is the writings of Richard of St. Victor, which by now (damn/thank you thesis?) have seeped into my bones. In my thesis reading, I became enmeshed in Richard of St. Victor’s way of viewing the world, and my reflections on sin in this Lenten season are Richardian in nature. What I like about Richard’s understanding of sin is his way of describing it as weakness arising from the Fall. I have always been uncomfortable with definitions of sin that describe humanity’s condition as being in constant rebellion against God. The sin as rebellion model seems to be to demand sin as a focus, and constantly holds us in the very shame and judgment described by Rachel. Richard does not deny the active rebellion of the Fall, but does not translate this active rebellion into his understanding of all sin, or of the human condition as a whole. Instead, he sees three weaknesses arising from that Fall. These three evils counteract the three goods of creation. There are three goods: that God made humanity in his image, in his likeness, and that he gave them (originally) immortality of the body:

Richard believes that humanity retains free will after the fall, the freedom to choose good or evil, but lacks the strength to follow through. As he writes, “By sinning one could lose the power of merit, but, as was said above, one will never be able to lose or lessen the freedom of choice by any sin or punishment, because he always had and will always have the freedom of choice. Thus people have lost their power but not their freedom.”[3] Our postlapsarian condition means that it is harder to turn away from false goods to true goods. We must be aided by the sacraments, by the teaching and guidance of others, and especially by the Holy Spirit to be able to grow in virtue and contemplation.

But what I like most about Richard’s teaching on sin is that he doesn’t do much of it! His focus is, instead, on the restoration of the human person. Sin arises, according to Richard, from disordered affections (concupiscence) and from ignorance. So restoration comes about by ordering the affections to participate in the true good, and by contemplating the true good, that is, God. Richard’s teachings focus on our growth in virtue and by that, sort of retroactively teaches about sin by showing us the opposite. He teaches that by meditation we come to know what is good, by the exercise of virtues we grow to love the good, and in contemplation we are confirmed in the good. For Richard, this restoration restoration of the human person is not only individual but communal, as Eva beautifully explained in a previous post.

Returning to Pope Francis’ admonition, it can be good, I think, to reflect on our own sin, to be zealous against it, to focus on it not as punishment or as unreasonable expectation, but as a catalyst to seeking God. Lent is a good time to recognize the difference between us and God, to reflect on our weakness and the effects of sin in our own lives, not for the purpose of beating ourselves up in a self-satisfying ritual of flagellation, but to turn our eyes to seek God, and through that, to seek out restoration of ourselves and our world. As Richard writes, “Consider and know the magnitude of the disease, so that you may desire more anxiously, seek more diligently, and love more ardently the remedy of the doctor.”[4] The acknowledgement of sin and weakness in ourselves and in our world can be helpful to turn our eyes to Jesus and to earnestly desire growth in virtue as we aim to see God face to face.

At the same time, however, I believe that the best way to turn from our lazy indifference is not to focus on sin and our sinful condition but to seek out restoration. So this Lenten season I intend, following Richard and Fr Levelle, to fast from my lazy indifference to sin not by focusing on sin, but by focusing on the virtues: on love, on humility, on hope, on patience, and on compassion.[5]

[3] Richard of St. Victor, On the State of the Interior man.

[4] Richard of St. Victor, On the State of the Interior man.

[5] Not an exhaustive list, obvs. Also, artwork is “The Good Samaritan” by Delacroix