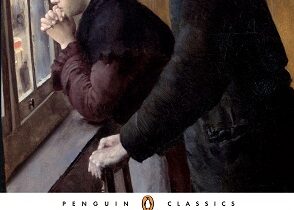 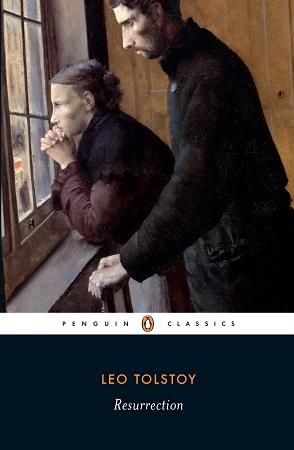 Prince Nekhlyudov, a Russian aristocrat who has been summoned for jury duty, recognises with horror that the accused is a woman he seduced and abandoned ten years ago when she was a servant girl. She had become pregnant and been sent away in disgrace – and in her desperation, after the child died, had turned to prostitution.

“A complex, painful process [takes] place in his soul” as he watches the trial, seeing himself as the cause of her current misery. After a long internal struggle, he determines to atone for his sin by following the girl into exile in Siberia, marrying her, and serving her for the rest of his life.

While she awaits deportation in prison, he visits her regularly, and meets the other prisoners. It occurs to him that they are no more immoral or selfish than those who imprison them. Of one young man he reflects:

This lad is no extraordinary villain, but just an ordinary person – anyone can see that – and he became what he is simply because he found himself in circumstances which create such people. And so it seems obvious that if we don’t want lads like this we must try to wipe out the conditions that produce such unfortunate individuals.

He begins to see society in a totally different light, and realise the extent to which the rich depend on the poor for their way of life. Looking round at the prison, he reflects on

the enormous size of the establishment, the whole army of officials, clerks, warders, messengers, not only here but throughout Russia, who received salaries for [law enforcement] . ‘Supposing we spent even a hundredth part of all this effort on helping these derelict creatures whom we now look upon merely as so many arms and bodies vitally necessary for our comfort and tranquillity?’

On the long train ride to the exile of Siberia he meets another prisoner, a mentally unhinged demagogue, railing against the brutality of the prisons and the whole law enforcement regime.

‘Ask him what he thinks ought to be done with those who refuse to obey the law,’ said [one man].

The old man broke into an odd laugh.

‘The law!’ he repeated contemptuously. ‘First he robbed everybody, taking for himself all the land and all the wealth that belonged to the people – converted it all to his own use – killed all those who resisted him, and then wrote laws forbidding men to rob and kill. He should have made the laws first.’

In the final few pages of the story Nekhlyudov picks up a New Testament and reads the parable of the ungrateful servant. The final lines impact him powerfully: “I forgave you all that debt because you pleaded with me. Should you not have had mercy on your fellow-slave, as I had mercy on you?”

‘And can that be the whole answer?’ Nekhlyudov suddenly exclaimed aloud. And the inner voice of his whole being said, ‘Yes, that is all’. …

It now became clear to him that all the dreadful evil of which he had been a witness in gaols … and the calm self-assurance of those who committed it, resulted from the attempt by men to perform the impossible: being evil themselves they presumed to correct evil. Vicious men undertook to reform other vicious men and thought they could do it by mechanical means. But the only thing that came of it all was that needy and covetous men, having made a profession of so-called punishment and correction, themselves became utterly corrupt, and continually corrupted their victims.

… Now Nekhlyudov understood that society and order generally speaking existed, not thanks to those legalized criminals who judge and punish other men, but because in spite of their depraving influence people still pity and love one another.

I found this book deeply impacting for a number of reasons. I didn’t agree with everything in Tolstoy’s depiction of the injustices of society. But I did see myself mirrored in his carefully characterised aristocrats, only vaguely aware of the toil and misery that keeps their lifestyles affordable. I find it easy to justify structural injustice on the basis that I can’t do anything about it, when what I really mean is that I’m not willing to do what I could. Change will only come gradually, as one by one the individuals with power choose to use it on behalf of the powerless, setting an example for others.