Categories Menu
Home » Philosophy » Faith, Power, and the Centurion: A Reading of Matthew 8: 1-13 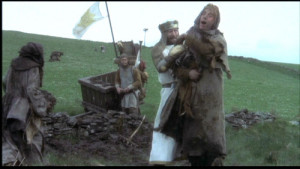 I know Jesus admires the guy, but I have never really liked the centurion found in Matthew 8. He seems, well, a bit disingenuous. Perhaps I don’t trust the sentiment found in the passage, or the inclinations I initially cling to to overlook the fact that the guy owned slaves. My first inclination is to say, “Oh, look how much he cares for his servants. He is such a good master.” And then I think about the words good and master and it bugs me, and I wonder if it is at all possible to be a good anything if you are master over another human being. Another thing is in both the Matthew and Luke narratives we have two different kinds of servant. The first servant, the one the centurion wishes for Jesus to heal in verse 6, he calls παις (pais), which in the Greek means servant, slave, or child. It implies a familiarity. The second type of servant he mentions in verse 9 is δουλος (doulos) meaning bondservant or slave. It’s a generic term that, according to the Greek lexicon the BDAG, has a “socioeconomic context,” which I like to think as a nefarious “socioeconomic context.” The first type of slave implies relationship; the second type implies a structure of power and authority. Therefore, it seems that in the centurion’s household there was a normative hierarchy that raised a particular slave over the remainders. This indeed is troubling. The fact that he preferred one servant over others does not seem to be something we should emulate.

Even in Luke’s version of the story, the declaration of the Jews that the centurion was a good man does not make him worthy of the emulation that Jesus declares that he is worthy of. After all, the centurion was still a representative of the Roman Empire, a man who presumably would put the needs and desires of the Empire above his care for the people of God. Thus, the elephant in the room is: does Jesus’ healing of the servant, and his subsequent declaration of the goodness of the centurion’s faith, imply that Jesus approved of slavery and the Roman Empire? This question should make us feel uncomfortable; and while we must be careful about reading our contemporary perspectives into the Biblical context, this carefulness does not mean that we cannot say slavery and imperialism, even during Jesus’ time, was and continues to be evil and an affront to God’s love and care for the world.

To further this criticism, in the first section of this chapter, after Jesus heals the leper he instructs the leper to tell no one and only to show himself to a priest, thereby suppressing the leper’s voice in favour of the cultural hierarchy. As good Biblical scholars in our analysis of this passage we should echo Dennis’ call of foment in Monty Python and the Holy Grail, “Come see the violence inherent in the system.” However, we must also ask what exactly was Jesus’ role in the system of violence and oppression that was deemed as the cultural norm. To do this we shall now turn to Romans chapter 12:16-21.

In Romans 12 Paul is exhorting his readers to live a life that is holy and pleasing to God. The instructions he gives are countercultural. He rejects the patron client relationship that was prevalent in this time. In opposition, he instructs his readers to “associate with the lowly” (v. 16), and to “live peaceably with all” (v. 18). He concludes the chapter by quoting Proverbs: “If your enemy is hungry, feed him; if he is thirsty, give him something to drink; for by so doing you will heap burning coals on his head.” The implication in this chapter is that by offering our bodies as “spiritual sacrifices” (v. 1) we are not “conformed to the world” (v. 2), instead we are transformed by faith. This transformation occurs because we encounter God in faith. Therefore, for Paul, our association with the lowly and our rejection of the hegemonic power that seeks to dominate the world for its own ends is only possible through faith. Therefore, true faith is not only an assent to the sovereignty of God, it is also a rejection of the cultural practices that presume a normative hierarchy.

If we read this analysis back into the Mathew passage, we see that the healing of the leper, and the praising of the centurion, are both examples of Christ’s rejection of the blatant chauvinism that dominated first century Israel. In the instance of the leper the question I posed earlier, why did Jesus instruct the leper to not tell anyone but go to a priest, should be resolved through our reading. Verse 1 of Matthew 8 tells us that great crowds followed Jesus down the mountain. Therefore, many people saw Jesus touch the leper thereby making himself unclean. Yet, while Jesus had the authority to heal in the eyes of the culture, he did not have the authority to restore someone who was rejected by society as sinful and impure back into the social structure. Only a priest had the authority to do this. But, the fact that Jesus humbled himself to touch the man, thereby making himself impure, is an example of faith living itself out through action. In this instance, Christ does not tear down the walls of oppression by speaking out against the authorities of subjugation, instead he becomes unclean, he diminishes himself in order that one who is lowly can be restored. Christ did not consider himself to be so high and important that anyone was below his love.

Likewise, the faith that the centurion exemplifies is the same faith that Jesus acts out in his cleansing of the leper. Here we have an example of a gentile becoming like Christ. The centurion begins his response to Jesus’ willingness to heal his servant with an assertion of lowliness, “Lord, I am not worthy to have you come under my roof, but only say the word, and my servant will be healed” (v. 8). He follows this up with an explanation, “For I too am a man under authority, with soldiers under me. And I say to one, ‘Go,’ and he goes, and to another, ‘Come,’ and he comes, and to my servant [δουλος], ‘Do this,’ and he does it.” What the centurion is implicating with this explanation is he has the power, as a commander in the Roman Empire, to command Jesus to do his will. The act of faith that Jesus praises is the centurion’s rejection of that power for the sake of one he loved. We can only hope and trust that the faith the centurion revealed led him to “be transformed by the renewal of [his] mind” (Rom. 12:2). Thus, the true act of faith, as Paul instructs in Romans 12, is not just recognizing authority when it reveals itself, but it is to be like the centurion and become less important, less powerful, and less worthy of the world’s vain praise. This is in order that we may overcome the evils that we have delighted in for a time, through the good example of our messiah, who was rejected and made unclean, so that we may be made clean through his most precious body and blood.