Categories Menu
Home » Philosophy » Metanarratives and the Fact of Christ 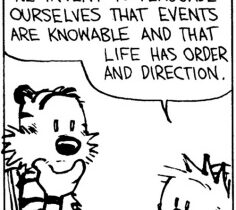 Metanarratives and the Fact of Christ 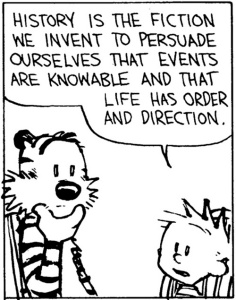 [H]ave you not read in the book of Moses, in the passage about the bush, how God spoke to him, saying, ‘ I am the God of Abraham, and the God of Isaac, and the God of Jacob’? He is not the God of the dead, but of the living. You are quite wrong” –Mark 12:26-27

Metanarratives have received much flak since Jean-François Lyotard’s The Postmodern Condition was published thirty some years ago. In it Lyotard addresses the structural schema that dominated western thought much of the 19th and 20th centuries. Lyotard’s basic philosophic claim is that all the great ideas that we have built society on, i.e. Christianity, Capitalism, Marxism, Liberalism, et al. are constructions of the dominating will of progress. For Lyotard, progress is not to be trusted as a grand narrative—thus his critique of Ryan’s latest blog post (and all Hegelian constructs) would be that orthodoxy in the name of logical progress is a false paradigm. For Lyotard, progress is only a language game used by progressives in order to assert orthodox authority over the willing masses. This is because, contrary to popular belief, humanity’s epistemological understanding is not based on logical or rational argument, instead how the idea makes us feel is what gives it meaning and importance. (Lyotard would have a field day with the Ted Talk style clickbait.) Therefore, all dogmas (philosophic, political, religious, and scientific) are hegemonic—they assert authority over the masses by appealing to the most base and common emotions and feelings of their constituents. Thus, all metanarratives are false because they adhere to a tradition that has no basis in truth.

Lyotard’s arguments, and postmodernism in general, have struck a subliminal chord with contemporary society. Particularly in relation to our ability to trust in a higher power that we cannot comprehend outside of our own individual reason. Many now see all institutions, such as the church, as manipulative forces that seek to control our feelings of the sublime. For Lyotard, who was influenced by Immanuel Kant, the sublime was a something so great that we can only comprehend it in the imagination through the application of reason. For example: the outbreak of Ebola in Africa, or the Indian Ocean tsunami are such great events that we mustcontextualize them and offer religious, philosophic, political, and scientific meaning to them in order to be able to comprehend them. Once we create meaning out of an experience of the sublime we limit it. For Lyotard, this contextualization of the sublime is precisely the hegemonic language game that institutions play in order to assert control over others. Postmodernity arose in order to combat such institutions.

For postmodernists, the sublime is liminal; it has a foot in both the imagination and reason; we can perceive the sublime, if it is understood as pure objectivity, but we cannot create objective meaning out of the sublime—for the sublime is diminished by subjective interpretation. We have no choice but to make sense of the world. Our “making sense” creates corrupt institutions that are based upon the subjective interpretation of the sublime. They are necessarily warped because the “idea” (if there is such a thing) cannot be truly construed in the objective rational world. Thus, we create excuses for the failure of our project because the idea can never be fully realized—the sublime is impracticable; it is the carrot that leads the horse of society, ever driving us onward but ultimately leading us into a ditch (war… genocide… drones) where we must start over by constructing new paradigms that are only an eternal recurrence—a repetition of the old ways brightly displayed with new beguiling glimmering guises.

One of the great joys of the Christian life is it is a part of a metanarrative. For Christians, the history of the world is the revelation of Christ. As Christians we partake in this metanarrative by living out the life of Christ. The fact of Christ, the Incarnation and the subsequent salvation, the birth of Christ in our souls, through the kenotic/pleromatic act of the atonement, should dramatically change the way we view and interact with the world. Instead of buying into a political system that tell us we are good because of the way it makes us feel, the advent of Christ tells us that we are good because we are regarded by God as worthy of His love. This gives us context to the Mark passage quoted at the beginning of this post. What the story of the burning bush points to is the metanarrative of the Christian life. We are not just thrown into a meaningless world in which we create metanarratives in order to construct meaning out of a meaningless existence. Instead we are incorporated into the great story of Christ’s revelation; a story that is not only found in the New Testament, but also the Old. This is why we should not limit the revelation of Christ in the Old Testament to prophetic texts. He is also discovered in the redemption of Israel, the love of Solomon for his bride in the Song of Songs, and in the narrative of the lives of Abraham, Isaac and Jacob that is continued today in our lives.

The history of the world is the history of the unfolding metanarrative of Christ. This is not to say that there is a new revelation that was not revealed in the Incarnation: a secret that has been only understood now, in this time, as a result of our ingenuity. This is a possible danger of Ryan’s assertions regarding the continuing development of orthodoxy, and it seems that this mode of thought would imply that Christ is not the same today as he was in the time of the prophets and the apostles. Nor does this claim of a Christian metanarrative say that we should dismiss Lyotard’s critique of metanarratives outright. Lyotard’s criticism is extraordinarily helpful inasmuch as it helps balance out the great human impulse for hegemonic structures of control. But to say that there is no such thing as metanarrative would be to imply that the fact of Christ has no impact on the way we perceive and live in the world.  It is also to say that the structure that Christ left us with, the Church, is a false paradigm for the way we should interact with the world. This would be the most troubling aspect of accepting Lyotard’s premise. Something I think we should reject with the utmost urgency. For the Church, according to Paul, is “the household of God… a pillar and buttress of truth,” (1 Tim. 3:18) through which the great mystery of Godliness is revealed as the metanarrative of Christ working itself out through the continuing history of the world in the life of His Church.