Categories Menu
Home » Philosophy » The Apophatism of Reason: The Violent Morality Behind the Death of God 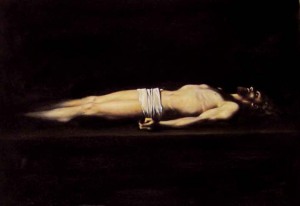 The Apophatism of Reason: The Violent Morality Behind the Death of God

In a 1611 poem, John Donne addressed what he saw as the failure of the world to recognize the meaning behind the death of an innocent child. “The First Anniversary: An Anatomy of the World” is a long and difficult poem. Difficult because it is a failure; it is too obtuse; it weaves in and out of a narrative and fails to draw the reader into a common understanding; it creates an apophatic distance between the subject, Elizabeth Drury, and the reader of the poem. We, as readers, cannot know who exactly Elizabeth Drury was, or the reason for her death, because we are incapable of looking beyond ourselves into the greater mystery of the world. Donne claims, “Man hath weaved out a net, and this net thrown/Upon the heavens, and now they are his own./Loth to go up the hill, or labour thus/to go to heaven, we make heaven come to us.” (ll. 279-82) Donne sets up this sentiment in direct contrast to his earlier sentiment “This man, whom God did woo, and, loth to attend/Till man came up, did down to man descend;/this man so great, that all that is, is his,/O, what a trifle, and poor thing he is.” (ll. 167-71) Thus, for Donne, the epistemological cosmology behind the early modern world was too focused on uncovering the vast mystery of the universe while ignoring the fact that the mystery had already been revealed to us in Christ.

For Donne, the problem was the way in which his contemporaries were searching for knowledge was nihilistic. The early modern rationalism was seeking to make nothing of the sacred by rationalizing it out of existence. The desacrilization of the world, the destabilization of mystery and wonder, tarnished the beauty of the world—the world no longer pointed to glory of God but the glory of humanity; this absolute distortion of beauty and goodness is the corruption that sees the “world’s caracase” (439) as something worthy to fawn over. This dichotomy is at the heart of the poem, and the radical subversion of the truth that Donne sees in the human quest for knowledge is something that still is with us today, not least in the evangelical atheistic movement.

What troubles me about the evangelical atheistic movement is it structures meaning apophatically. It claims that whatever is rational is not God. The substance of reason can only be found in human determination. We create meaning by elevating a human ideal that is constructed by what we, at that precise moment, hold to be a highest form of human ingenuity. For an atheist, humans have always been god, and, thanks to progress, the imposition of a higher meaning attributed to god is no longer necessary. Our ancient structures of religion need to be torn down in order to eliminate the vestigial impulse that limits the ascendency of the human. Everything that is not God must be elevated. Thus humanity, nature, the universe take on a new higher importance because they are proof that God does not exist. Taking this reason to its final end means that human tragedy is meaningless and that this meaninglessness is good. Therefore, the highest good has now become the violent act because this points to the fact that God has never been. For example, religious violence must be a necessary event because it is a revelation of the impotence of God–it is truth in the highest degree, it is the glory of humanity by which we threw down the false idol and elevated ourselves. Therefore, in a twisted way, the recent beheadings are good because they reveal to us the violent impulse that is at the heart of any religion. How clever and good we have become through violence! How transcendent!

This rationality is what Jean Baudrillard refers to as the “imperialism of reason.”[1] Baudrillard’s response to this imperialism is to construct a nihilistic outpost where he can look at the structures of meaning and reveal their mortality.[2] This, in my opinion, is the final and only move an atheist can make. The mortality of meaning means that meaning must die. All structures, all impositions of “truth,” are only simulations of an ideal. Scientific reason is such a structure, and the fact that reason makes apophatic claims of meaning must mean that reason itself, in the end, is a false god that must be sacrificed to the human desire for meaninglessness. Thus, we are beings-toward-nothingness, and the false gods of science and reason must fall. That is, of course, if we do not submit ourselves to limitation.

Jens Zimmerman, in the concluding chapter of his book “Recovering Theological Hermeneutics: An Incarnational-Trinitarian Theory of Interpretation” writes about the goodness of limitation in regards to human knowledge:

“Indeed, human knowledge is radically limited. On a theological account, however, interpretation is not first about us but about God’s self-revelation. Ontology and transcendence, sameness and otherness, nature and grace are not two separate kingdoms. In the incarnation, the two have become one. By looking to this self-revelation of God, we gain self-knowledge by losing all pretensions to self-understanding. Self-knowledge is not possessed but given as a gift. Its nature is relational and hence radically hermeneutical… Contrary to deconstruction, freedom, unity, peace, and community are found not in apophasis but in the hermeneutical appropriation of God’s incarnational address to us in which, mysteriously but truly, difference and sameness reside without compromise.”[3]

If we follow Zimmerman and Donne, then the radical limitation of knowledge, the reduction of the self in light of God’s glory discovered in the Incarnation, counteracts our violent impulse to elevate ourselves in the place of God. For, if humanity’s ontology is discovered in the incarnation, then the violence that is found in the cross is the violence of reason. For it was there on that hill that we revealed our atavistic impulse to destroy God; this is an impulse that is still with us today. To counteract this predilection, God descended to us so that we might understand that our violence does not diminish God’s revelation. Instead, what the Incarnation proves is that our violence is an imposition of the human will that seeks to destroy God’s action in the world.