Categories Menu
Home » Culture » A Response to “Women Against Feminism” 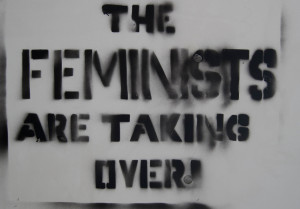 A Response to “Women Against Feminism”

Note: This article is being re-shared in light of Peter Leithart’s recent claim that “Feminism is gender Arianism” in his April 8, 2015 First Things article. I find Leithart’s claim suffering from the same error as the WAF approach: claiming a universal and singularly identifiable “feminism.”

A couple weeks ago, the Tumblr blog Women Against Feminism (WAF) showed up via Buzzfeed on my Facebook timeline. I clicked the link to find myself scrolling through images of women holding up signs stating various reasons why they are not feminists. These reasons can be grouped in a number of categories, most notably:

I am not a feminist because…

Despite finding myself on the more ‘conservative’ end than many of peers on this subject, this blog got under my skin not because I am some “raging,” man-hating feminist. Rather, this blog got under my skin because I believe it so poorly represents the most important and most needed contributions of feminism. Of course, I recognize that feminists come in all shapes—including those who might better fit some of the feminist caricatures presented on WAF. I also recognize, though, that there is still a real need for the feminist impulse in our relationships, work/church environments and academic discourse.

WAF has provided a stage for a very important and relevant issue to be treated as a radical ideology, which then necessitates that it must be thrown out. I should not be surprised at the polemical way that feminism is treated considering that our society, particularly our online culture, finds its home in polemical debate. My concern and anger with this treatment of feminism is that there is an ignorance of the issues at hand and a plethora of rhetoric and haphazard opinion. Again, I should not be surprised by this. But, honestly I am.

The obvious does need to be stated: I am a woman in a male-dominated doctoral program studying in a male-dominated field. I experience firsthand the need for the female voice to be present and held up within a largely male conversation. According to WAF, because of this very feminist impulse I must also be advocating for a hatred of men, a judgment of stay-at-home moms everywhere, and a desire to mask my femininity—all of which I find suspect.

Worse, though, is that according to WAF there is no male-dominated power structure at hand in our society. Patriarchy is not real. Equality among sexes is already realized. But…

Less than 100 years ago, the right for women to vote in the US was non-existent. Today, 20% of the US Congress is female. Ten years ago, the female representation in Congress was just under 14% and less than half (6%) of that a decade earlier. And obviously the numbers get smaller the further back we look. I use these percentages because they spotlight the most obvious place of power in American society–and, of course, there are a myriad of other examples of gender inequality in society. It is only in recent years that a number of notably powerful women have become a regular occurrence. To argue that equality is already a present reality simply ignores where power tends to reside.

And yet, more than anything, the greatest discomfort I find in this blog feed is the argument that to recognize the victimization of women undercuts empowering them. I have written a post already on the reality of being a woman and a potential victim. But, to say that women do not continue to be victims of sexual violence in our own society (and around the world—India is a prime example of this) is actually dangerous. To me, it is like insisting that you do not need to wear a seat belt because you and everyone you know is a good driver. To recognize the victimhood of women is not to make excuse for weakness or deny empowerment, but to look at the world with open eyes and recognize the real and present dangers.

Feminism, like most ideologies and movements, comes in many shapes and sizes. Some of those shapes and sizes are angry or seemingly obnoxious. But to throw the entirety of feminism out of the window because some forms of it rub you the wrong way is foolish. If you think feminism is only for women and/or men-hating women, then let me insist that you are mistaken. My own account of feminism recognizes the importance of feminism for men and women— in fact, Lance dealt with this in his own post a few months back. If you do not like the way feminism has been articulated, then articulate it better. Do research, ask questions, but please do not throw it out.