The Underside of Nonresistance 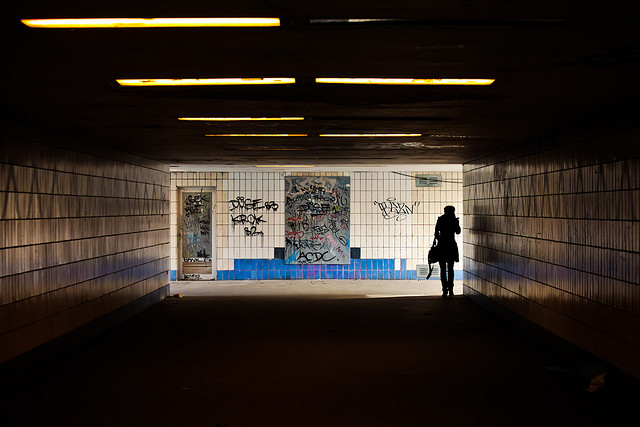 I am new to the conversation of pacifism. It has always been an uncomfortable one for me to engage in—both because people tend to get heated in debate, and for this anonymous discomfort I always have felt in the pit of my stomach whenever conversations arise. But, alas, for the good and the bad, I am being faced head-on with the conversation of non-violence in my coursework this term.[1]

One of the conversation partners I have been engaged with is John Howard Yoder.[2] In his essay “Peace without Eschatology?” he expounds on his pacifism this way:

The church’s suffering, like the Master’s suffering, is the measure of the church’s obedience to the self-giving love of God. Nonresistance is right, in the deepest sense, not because it works, but because it anticipates the triumph of the Lamb that was slain… God’s love for us being right at the point where God permits sin again himself and against others, without crushing the rebel under his/her own rebellion. The word for this is divine patience, not complicity.[3]

By suffering in this way, Yoder argues that we are living into the eschatological reality rather than living as though Christ’s death and resurrection has not already occurred. Much of this essay is focused on the political realm of violence and nonresistance, but there are points along the way where Yoder makes clear that he is not only of corporate nonresistance, but also the personal—the two go together: “Personal survival is for the Christian not an end in itself; how much less national survival.”[4]

In another essay, where he is responding to Reinhold Niebuhr’s Christian ethics, he describes this kind of nonresistance as living in the reality of “what ought to be… what is in Christ.”[5] Near the end of the essay, he writes: “Sin is vanquished every time a Christian in the power of God chooses the better instead of the good, obedience instead of necessity, love instead of compromise, brotherhood instead of veiled self-interest.”[6] Here again we see the personal day-to-day playing out of nonresistance. Patience in the face of suffering—rather than protection of self-interest and ultimate concern with personal survival—is what it means to live a life in the ought, a life in Christ.

In reading these articles that discomfort in my stomach, which for so long had sat dull and wordless, suddenly found its footing: nonresistance for me means nonresistance to the nature of being a woman in a broken world and this might mean, well, really horrible things.

Being that I am studying theology, a field dominated by men, within a program also dominated by (wonderful) men, I have had a keen sense of what it means to be a woman reading theology. There have been a number of points where my antenna has gone up and I have thought: “would a woman ever be so quick to assume this? or jump to that? Or be so concerned with this other thing?” This is not an issue of ontology (well it might be, but I am not going to get into that here. Eva, however, dealt with this  a bit here), but it is an issue of belonging to a system where the experiences of being male and being female are at times concretely different. For me, this particular conversation of nonresistance is one of them.[7] When I go out for a run around the Baylor campus, I get hollered at, men my father’s age slow down in pickup trucks and stare at me as though I was a creature in the zoo and I always run before the sun sets because I am aware of the dangers that lurk in the shadows at night. If I ever were to be cornered, fighting like hell may not get me out of the situation, but the thought that I should not even try makes me feel sick. What would it mean to choose the “better instead of the good” or “brotherhood instead of self-interest?” I am not sure what else Yoder’s nonresistance would look like in this situation other than to NOT RESIST being assaulted. Is that what it would mean to live in “what ought to be?” Does this exemplify what it means to suffer in anticipation of the triumph of Christ?

Maybe it does. Maybe I am missing something.

What I hope to ultimately propose here is that  it may, at least at times, be easier to make the kind of argument Yoder makes when you stand in a place of privilege, a place of power: when your standard position in society is not as victim, when in your mind you jump to protection of family or nation long before considering the real, ever-present reality of a violation to self.

[1] Luckily, I study with a group of people who are civil in their conversation.

[2] I am not going deal with his personal life in this article. I am sure in a different article bringing that discussion in would be helpful. In this one I think it may distract.

[7] I know there are women pacifists. I did a search around for women speaking to this point and couldn’t find anything—but I know there is stuff out there. If YOU know what I should be reading, please leave it in the comments. Thanks.