Categories Menu
Home » Scripture » The Burning Heart of Memory: An Appeal for a Return to Augustinian Hermeneutics 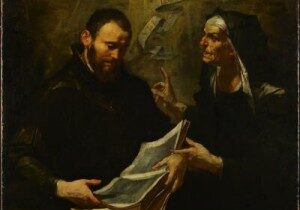 The Burning Heart of Memory: An Appeal for a Return to Augustinian Hermeneutics 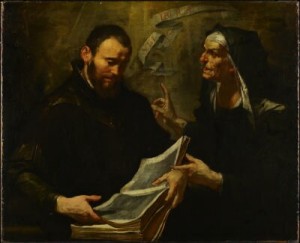 I would like to think that all that was written in the Bible came without struggle. That the author of the text sat down to write and was inspired to compose a meaningful text that has influenced countless others since its composition. I have difficulty imagining David struggling in his writing of the Psalms, or Jeremiah and Ezekiel in their turn of a phrase. It is perhaps naïve to think such things, and extraordinarily unhelpful in the case of my own writing, but it lends simplicity to the text—anyone, if awakened and inspired in this manner, could write these wonderful words without breaking a sweat.

When reading the Bible, I sometimes wonder what words were left on the scrap heap, what words were erased when David wrote Psalm 23, in order for the theological meaning of the text to shine forth? In Biblical scholarship this step is called redaction. The basic theory is that years after a Biblical text was written, a redactor joined together a series of writings by an author (or a school of authors) and formed a book out of it. This is why you sometimes hear or read about two or three Isaiahs. The author, then, is not necessarily the original author, but the redactor—the person or group of people who created this final form out of the scrolls that they had. The difficulty with redaction criticism is it is often a rabbit hole that discovers proof in the most miniscule of differences. It also throws a wrench in the orthodox understanding of Biblical inspiration.

Redaction, if taken seriously, inextricably leads us to question what it means to be inspired. Barney, in a recent post, has argued we should follow Paul Ricœur and look beyond the cultural subtext of the narrative for the inspiration to help us in our interpretation. For Ricœur, this intellectual ingenuity is found in the reader’s response to, and experience of, the text. This illumination says less about the text and more about the self’s experience of the text. To put it another way, when the Bible was written it was composed to frame and answer a series of questions about the author’s, original or redactor, experience of the world. Likewise, when we interpret a text we really are interpreting our self in relation to the text; reading becomes an anthropological discovery—for Ricœur, we read the Bible to ascertain the essence of our selves in relation to the other who composed the text. If meaning is deduced in this way, the text, to paraphrase Roland Barthes, is always in suspension; it never reveals what it is about; A does not always equal A; history does not give meaning—one’s subjective understanding of the text gives more meaning to the written word than the author who wrote the text; the reader’s understanding is based on their memory of past experiences, and it is these memories that give signification to the patefaction of God’s testimony of God’s self.

There is something to this thought. After all, I highly doubt that Psalm 23 was written in the five minutes it takes to copy it on a page. Inspiration, in my experience, does not come without rewrites, meditation on the topic, and contemplation of my experience of the world. Likewise, it seems that scriptural inspiration would develop from a life committed to seeking after God–a constant honing of memory that seeks after understanding. Therefore, it seems that Ricœur is right, and when we seek the meaning of scripture we should not look outward to history, but inward to our memory, to what the disciples on the Road to Emmaus described as their “burning hearts.”

While this appears to be a fine solution, the complication lies in the fact that in order to recognize their burning hearts, Jesus needed to explain to them the historical reality of scripture. It seems that Luke is saying that before we use scripture as an anthropological tool to understand the meaning of our existence, the foundation of our understanding of the Bible needs to be based in the historical experience of the author: the hope and a literal fulfillment of the messianic promise. Therefore, as was the case the early church fathers, the literal understanding of the text should be the foundation for further ontological examinations, otherwise known as spiritual interpretations. For the fathers, the worry was, without the foundation of a literal and historical understanding, interpretations were in danger of becoming grounded in Gnostic fallacies. One only needs to read a bit of Ireneus’ “Against Heresies” to see this is the case. But, in light of redaction criticism, can we really trust the historical projection of the author if the author isn’t who they were claiming to be in the text? What a conundrum!

To recap, it seems we can’t trust a literal understanding of the text because it was not the original inspired authors who finalized the text. We also have to be suspicious about personal interpretation, as it may discard the historical reality, as well as the authorial intention, of the inspired word of God as a purely subjective opinion of a people group who were oblivious of our enlightened contemporary consciousness. It seems hopeless. Either way we are prone to error.

I think whenever we ask how we should interpret scripture, we should also be asking why we need to interpret it, and what end does this particular style of interpretation seek? If the purpose of interpretation is to strip away the unnecessary husk in order to discover the kernel of truth that helps us understand the essence of Christianity, then we acquiesce to the fallacy of the materialist idealism that ran rampant in 19th century theology, as well as the redactive criticism that followed so closely on its heels. If instead, the goal of the interpretation of scripture is anthropological, self discovery, then the impetus of our understanding is self-knowledge, which sounds an awful lot like Adam’s sin.

Saint Augustine counteracts both of these fallacies by claiming that true memory, true interpretation, is the impulse of the image of God that draws us into a transformative relationship with our maker. In order to understand this memory we have to live life that is dedicated to recognizing the image of God that overflows into our every experience. This is a life that is devoted to the development of virtue, a life that finds true fulfillment in contemplating our eschatological hope in light of this glorious memory. For Augustine, the church fathers, and the authors of the Bible, to read and interpret scripture was to live in the hope that they would become like those who wrote it: the saints who were so connected to God that their words became a projection of the Word of God who dwelt among us: the Word who became the literal fulfillment of the messianic promise. Therefore, following their example, our goal in interpretation should be to prepare our hearts to meet the Word who revealed himself as a saviour, the Word that shocks us on the road of despair and brings understanding to our burning hearts of memory.