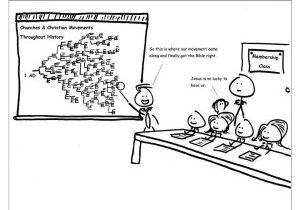 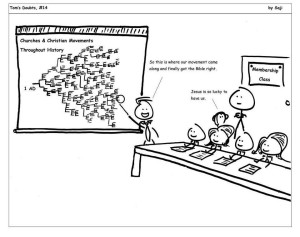 How should we feel about the existence of multiple denominations? “If we are aware of the true nature of the Church,” writes von Balthasar, “we must feel this split not only as a daily wound but even more as a constantly burning shame.” Why? Because, he says, “the essence, and not merely the name, of the Church is agape: unity in love.”[1] Karl Barth says with equal strength that “we should not try to explain the multiplicity of churches at all. We should treat it the way we treat our own sin and those of others: as sin.”[2]

These passionate words from two theologians, one Catholic and one Protestant, came into my mind when Lance asked in his last post: “is the potential unity of Rome and Orthodoxy … helpful to the whole of Christianity?” What I like about Lance’s post is that he speaks as a Protestant who cares both about church unity and about the disagreements which broke it in the first place.

But Lance’s attitude is not the one I most frequently find among Protestants. I more often hear that church division isn’t really a problem; that it is rather like cultural diversity – something to be celebrated rather than lamented. Besides, we all agree on the essentials, right? Isn’t invisible unity what really matters? Today there exists a more laissez faire attitude (reflecting the surrounding postmodern culture), which neither cares much about the divisions nor about the original reasons for them.

Although I once thought of denominations as cultures, I no longer believe that to be a good analogy. A better one comes from the Bible, when Paul compares the church to a body.

I used to apply this passage only to individuals in a local church, but it applies equally if not more to the global church, and shows the important distinction between diversity and division that is lacking in the ‘cultures’ analogy. Different cultures don’t need each other, nor are they designed to work as a team. But in an organism, differences are a strength only when all the parts are rightly connected.

Should we see church division as a problem, like severed limbs each trying to act autonomously? Can we even do anything about it? If you are a leader, teacher, or have any influence on the way your church thinks, then the answer to both questions is: yes.

Division is a problem for many reasons, but I’m only going to highlight one very practical reason. When we are disconnected from other expressions of Christianity, it is easy for us to think that the tiny corner of the gospel we have grasped is actually the whole gospel, and emphasise our bit of truth as if it were the only (or most important) truth. Then we are led into a cycle of endlessly repeating that one truth, and trying to feed off it, when there is an unimaginably vast treasure of wisdom, beauty and life-giving nourishment contained within the breadth of the Christian tradition.

What can be done about it? I would suggest two things:

I don’t think the problem is best understood by the compromise: “unity at the cost of truth or truth at the cost of unity.” Instead, I see unity as the only way to sustain the truth in the long run. Christianity has always been a community religion. The easiest way anyone can go astray is to separate themselves from the community, to stop listening to those around them who share the same Lord and Saviour.

Jesus’ last and most central prayer for his disciples was “that they may be one” (John 17:21). And why would Jesus pray for such a thing if invisible unity was inevitable anyway? Not only Jesus, but also (according to N.T. Wright), “we find that for [Paul] the one, single community is absolutely central.”[3] If we want to have the same agenda as the New Testament, then unity needs to be on it.