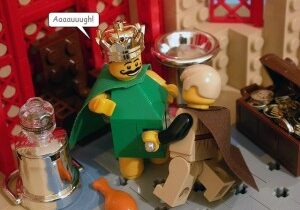 On How Different Exegetical Methods Work: An Allegorical Reading of Judges 3:21-22

Judges 3:21-22: Ehud reached with his left hand, drew the sword from his right thigh and plunged it into the king’s belly. Even the handle sank in after the blade, and his bowels discharged. Ehud did not pull the sword out, and the fat closed in over it.

Poor Ehud, exegesis has not been kind to him. While to some, the killing of Eglon is a morally reprehensible act, it is justifiable because it led to the freedom of a people enslaved. For these commentators the ends justify the means. To me this is not exactly an ethical high ground; it is not the principled paradigm you would want your children to copy. Another strike against Ehud is that every commentary I read picks up on the fact that he was not filled with the spirit of God. That he, in no uncertain terms, was a morally ambiguous and ambitious man acting out on his own volition. Ehud, it is highlighted in most commentaries, is the judge that begins the downward spiral, the descent into sin and idol worship, that ends with the rape and dismemberment of a concubine in Judges 19.

Perhaps my problem with Ehud is an image problem. Perhaps he needs a TV makeover. A reality show where they fix his withered right hand, get him a Lindsey Lohan type interview with Oprah, show what a nice guy he is, reveal to the world what a great father and pet owner he has become: “Oh, look how much he loves his beagle Benny—it was a rescue dog and he saved it from certain death. Someone who loves dogs like that can’t be evil.” That will, of course, lead to the Hollywood movie based on his life. Where he will get a better catch phrase than “I have a secret message for you,” something like: “Yippy Ki-yay, Moab Faker.” Or maybe, “Fill your hands, you son of a Baal.” Or, “Do you feel lucky, well do ya, pagan?”

No, that wouldn’t do, for Hollywood can’t redeem Ehud and Eglon without changing the story. The main reason for this is Ehud’s act seems cowardly, he frees Israel through cunning and deceit, and Hollywood hates cowardice. A secondary reason is Josephus, who celebrates Ehud in his history of Israel, writes that Ehud and Eglon were something like chums. This means Ehud was a type of Judas, someone that we are bred to deplore. We can see this in the text. Eglon, and the rest of Eglon’s house, trusted Ehud, and welcomed him into his private chamber—this is an abnormal level of absolute trust and intimacy for a dictator to show, something that should be highlighted in our reading of the text. I mean, what would it take for you to kill your friend? What are we to do with this? Maybe a nicer part of the Bible will be more comforting.

In 1 Samuel 18, we are introduced to David and Saul’s downward spiral of a relationship. Throughout the next six chapters, it is David who continually finds favor in the eyes of God, whereas Saul does not. Because of this, Saul constantly seeks to end David’s life. Yet, throughout the narrative David refuses to kill Saul. What is interesting is in chapter 24 we have an exact replay of the Judges’ narrative. Saul is relieving himself in the privacy of a cave. It is the cave where David is hiding out from Saul, and David has the opportunity to slay Saul while Saul is going to the bathroom. But he refuses. What makes this story more interesting is that the Midrash tells us that David is Eglon’s ancestor—Eglon’s descendent was Ruth the great grandmother of David, and the genealogy of 1 Chronicles, yes we should all read the genealogies, claims that Saul is the descendent of Ehud, the slayer of Eglon. So in this cave story we have a great reversal, redemption enfleshed, a place where weakness overcomes revenge, a cave where forgiveness overthrows ancient wrath, a potential tomb that points forward to another tomb where mercy triumphed over judgment.

What are we to do with Ehud and Eglon then? Are we to say that Eglon was really good while Ehud was bad? Poor old Eglon, the man who is forever known to history as the guy who pooped his pants, because that dastardly Ehud stabbed him when he was going potty. No, this is not the way we should read this narrative. Instead we should look at the text allegorically, like the early church fathers did. We should look for the metaphor in the text that points to Christ. This is why it is important to say, as Rachel has instructed, that it isn’t just a literal historical text, but one that breathes, and lives. The Bible is a text that challenges us, deconstructs us, a text that tears down our barriers, and power structures, and stabs us on the toilet when we are most vulnerable, and through that descent we are forced to let go of who we think we are; but amazingly by letting go we ascend and we are transformed into who Christ sees us as.

To quote the Venerable Bede, when we read allegorically we have to look for the “allegory in the fact.” In other words, to understand allegory, we must look at the historical facts first. Eglon, the text tells us, was obese, and it was his obesity that was his downfall. The passage also relates that Ehud was left handed. Allegorically we can say that Eglon’s obesity is the weight of sin, and Ehud’s left-handedness is indicative of God’s judgement on sin.[1]  The allegory in the fact can be seen as the sword that remains when Ehud stabs Eglon; this sword is the judgment of God that is buried when sin is destroyed. Yet, out of this death of sin, comes Christ, the son of David, our redeemer, who died so that our sin may be no more. Christ, who took on the weight of our sin, our filth, our defilement, is the sword of judgment as well as the atoning lamb. In the eyes of the Father, he is both Ehud and Eglon, our sin and our redemption, our revenge and our forgiveness. He is our history and our hope. In this time, as we wait for our resurrection, as we hope in the despondency of our sin, the fact that we are waiting means we are claiming that the history of redemption is the gospel of Jesus, and the fact that he could be there in the death of Eglon, means that he can be here now in the bread and in the cup. Let us now, in this time, bury our sins and our pasts with Christ, so that we may rise with him and be transformed by the baptism of his death, the promise of his resurrection, and the glory of his ascension.

[1] This is not a negative reflection on left-handed people. Left here is being used as a metaphor; just as the goats are on God’s left in the parable of the sheep and the goats, so too is God’s judgment signified by the left-handedness of Ehud.