Categories Menu
Home » Culture » Homosexuality and the Flesh of Christ: Identity and Suffering

Homosexuality and the Flesh of Christ: Identity and Suffering

What follows is modified from a paper submitted for Theology 602 at Regent College. In it, I deal specifically with homosexuality, and not other groups in the LGBTQ community. 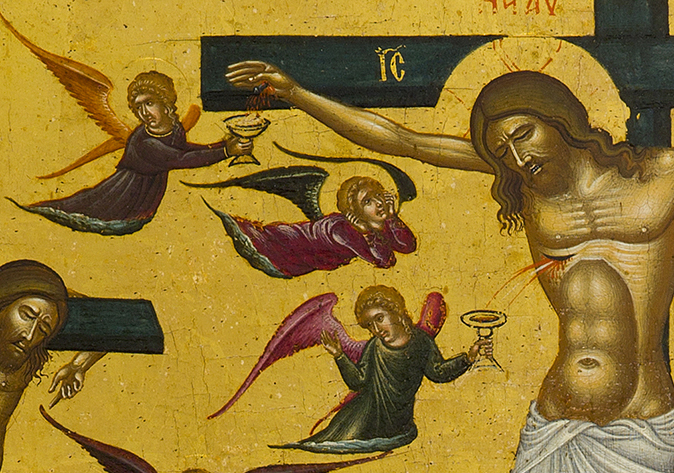 Andreas Pavias, Icon of the Crucifixion

In the past decade, Western cultures have become increasingly comfortable with accepting active homosexual lifestyles. The church, in turn, has struggled with trying to resolve its traditional moral stance in the face of the changing climate. Do we stick to our old positions that seem bigoted? Or did we perhaps make a mistake? This is by no means an easy issue, but for my part I am not convinced that either the liberal or conservative theological responses, and their accompanying political action, have dealt well with the complexities of the issue. Part of the problem, I believe, is a deficient understanding of our own identity as the church and the relation of that identity to suffering. I recently wrote a paper on the ecclesiology of the Roman Catholic theologian Jean-Marie-Roger Tillard, and I am persuaded that his ecclesiology, if taken to heart, might provide the church with a powerful but demanding response to homosexuality.

In working out my thoughts on this, I am operating under two assumptions of which I am currently persuaded:

This means that the church must call homosexuals out of an active lifestyle, but that this is a very high demand. Human beings naturally long for companionship, and our context, both religious and secular, stresses romantic relationship as companionship’s pinnacle. Homosexuals are asked to give this up. Thus, there is a great need for Christian self-understanding that can address the moral call on the lives of homosexuals while acknowledging the deep suffering it demands of them. Tillard’s ecclesiology is just such an understanding.

According to Tillard, the church’s way of life is fundamentally one “of love between brothers and sisters (agapē) understood, not just as a feeling, an attitude of sympathy and affection toward the other, but also as the motivation for actions as concrete as the sharing of goods, hospitality, service, mutual forgiveness.”[1] This way of life exists because the Eucharist “[effects] the passage of the personal body of Christ to the body which believers are.”[2] The members of the church are fundamentally the one body of Christ by the Eucharist, their very life flowing organically from their head.[3]

First, it dignifies their suffering because Christ Himself inhabits it. Tillard, quoting Augustine, says that Christ “himself toils in you, thirsts in you, is hungry and in tribulation in you[sic].”[6] This significantly includes suffering and overcoming temptation.[7] Through the Eucharist, Christ’s sufferings are theirs, and their sufferings are his, partaking thereby in his saving work for the world. When the Eucharist is offered, the sufferings of believers become part of the sacrifice of Christ offered up on behalf of the world. “[T]he sacrifice of Christ and the ‘spiritual sacrifice’ of the church become one because Christ takes the members of his body into the embrace of his sacrifice.”[8] Their suffering of temptation and of loss is not arbitrary tragedy but instead part of God’s saving action in the world.

Second, it calls the heterosexual members of the communion into solidarity with them as their sufferings are the suffering of the same body of which we are a part. This reality creates a radical equality at the eucharistic table, but “there exists a nuance in this equality. Precisely because of what it accomplishes in the Eucharist, the church has a preference for the poorest and neediest.”[9] This is because the suffering members of the church are where the sacrifice of the ecclesial body is actualized in agapē. Tillard, following Chrysostom whom he is referencing, makes this point in the context of care for the poor, but it would likewise extend to the homosexuals we are calling to celibacy. The logic behind this preferential treatment concerns the greater depths of suffering on the part of the poor who are one body with the rich. Indeed, Tillard himself makes this point when he says that “the New Covenant of the Lord’s sacrifice bears its full fruit in service to the poor and, more generally, to those who are in the grip of suffering.”[10] The suffering of the homosexual forbidden to engage in romantic relationship, especially in our cultural context, is greater than that of the heterosexual, who is therefore called into an active solidarity with the sufferings of his tempted brother around the communion table. He must, in some sense, make the suffering his own. This requires active action on our parts, not merely sentiment, for  “[t]he Eucharist is inseparable from what God loves above all: a people which does not accept human misery passively, a people unceasingly engaged in the sacrifice of mutual help and charity, constantly turned toward ‘others,’ particularly the most neglected ones whom God prefers.”[11] This means that our sacrifice takes place within “the gift of total and real life, whose form of existence is our body. The mercy of God exhorts us to the sacrifice of our real existence.”[12] The sufferings of the church in solidarity with our homosexual brothers and sisters who are suffering must be bodily. We cannot simply stand by and preach or give therapy to the homosexuals in our midst; we must actively enter into their suffering.

This means, of course, that if we are to respond faithfully to this vision of the church, practical steps must be taken. The church needs to develop a deeper theology of suffering if she is to respond to this call. Moreover, a richer theology of communion and of friendship, stemming from this ecclesiological vision, is absolutely crucial if the church is to minister faithfully to homosexuals, and indeed to all who are not called to married life. Part of this, especially for Protestants, ought to involve the formation of orders of ministry for the celibate to which heterosexuals especially ought to be called in bodily solidarity with their homosexual brothers and sisters of whom celibacy is demanded.

Tillard’s ecclesiology provides a powerful response to homosexuality by dignifying their suffering and by demanding solidarity with that suffering on the part of heterosexual Christians.

[1] Jean-Marie-Roger Tillard. Flesh of the Church, Flesh of Christ: At the Source of the Ecclesiology of Communion. Trans. Madeleine Beaumont. (Collegeville, MN: Liturgical Press, 2001), 24.