Categories Menu
Home » Theology » On the Resurrection and Liberal Theology; or, where I have my cake and eat it too. 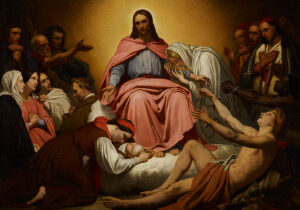 On the Resurrection and Liberal Theology; or, where I have my cake and eat it too.

If I were but mere dust and ashes, I might speak unto the Lord, for the Lord’s hand made me of this dust, and the Lord shall recollect these ashes…I am the dust and the ashes of the temple of the Holy Ghost; and what marble is so precious? – John Donne, Devotions upon Emergent Occasions

And the dead in Christ will rise first. – 1 Thessalonians 4:16 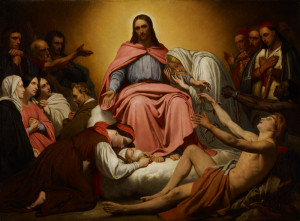 I don’t know about you, but I have trouble with the resurrection. It seems so fanciful, like the end of a good fairy tale, or a comedy where everything that went wrong ultimately leads to a final reveal—everyone gets married and lives happily ever after. But the resurrection matters. It is a core tenet of orthodox Christianity; it is a part of our creeds, and it is the foundation of the hope for eternal life that drives many people to believe. It is so difficult to believe in though. It circumvents all we know about life and death: the dead stay dead; the living goes on living; this is verifiable; this is our experience. So, why do we as Christians confess that we believe in the resurrection of the dead? Isn’t this foolishness? I mean, where is the proof?

For many liberal theologians, the actual physical resurrection is the first thing one needs to understand as symbolic. For example, for Paul Tillich, the great 20th century liberal theologian, belief in the resurrection is a symbolic reference to one’s ultimate concern.[1] This paradigm applied to the gospel accounts means that, for Tillich, the ultimate concern of the early disciples was the necessity for Jesus to be the person he said he was, the Christ. The Apostles essentially needed the resurrection in order to maintain their ultimate concern, to keep alive what was most important to them about Jesus, so they made it up. While this may seem like a betrayal of faith to us, to Tillich it is what propelled the faith—for Tillich the only orthodoxy is the faith of ultimate concern. This is because in Tillich’s theology, influenced by Kant, the categorization of the faith of individual human beings takes center stage. Thus, for someone like Mary Daly (whom Ryan quoted in his most recent post), ultimate concern is the subjugation of the downtrodden in the ecclesial hierarchy. Therefore, Christ’s Eucharistic presence points to their humiliation, and the corruption of the Catholic Church. Theology, for Daly, is the tool of the individual to reveal the inherent power structures in religion. Ergo, for Daly, one’s ultimate concern should be to tear down the corrupted and outdated hegemonic heterosexual and testosteronic edifices that have been maintained for the past 2,000 years.

Tillich, among many others like Daly, makes a compelling argument for a purely symbolic comprehension of the resurrection, and I think there is something there, something that can build and challenge our faith in, and understanding of, the resurrection.[2] But in denying the physical historical resurrection, Tillich and Daly are missing out on a whole section of Christian theology that the doctrine of the resurrection highlights: the goodness of the body in the here and now and in the world to come.

I believe that to hope in heaven is to hope in the bodily resurrection. For, the resurrection of Christ’s body guarantees our bodily resurrection, not our bodies as we would want them to be (I will probably not have a six pack in heaven), but our bodies as God sees them, as the image of Christ’s human ascended body. Therefore, it is not only our souls that bear the image of Christ but our bodies as well. Thus, even in death and decomposition, our bodies still bear this image. What this means is God still infinitely cares about our dead bodies as much as he cares about our living bodies. This is John Donne’s point in the quote above. For, if, as Paul claims, (1 Cor. 15:52) the dead will be raised imperishable, they are raised, not recreated; they are transformed, not made from scratch.

In this same context, the Apostle Paul states, “If in Christ we have hope in this life only, we are of all people most to be pitied.” (1 Cor. 15:9) What does this mean for the theology of Tillich and Daly—what does this mean for my doubts? Should I cast both away and say, “Bah, I believe!” For me, at least, it isn’t that simple. Faith is a daily struggle grounded in the quotidian reality. What I like about liberal theology is its insistence on seeing the world as it is. It is up to us to follow Christ’s example and make the kingdom of God happen. It is, as Ryan pointed out, one’s faith that compels “the demand of justice.” But, in the end liberal theology simply goes too far. Without the resurrection, or with the resurrection only being symbolic, this demand for justice is empty. Christ’s resurrection gives meaning to justice for the poor and downtrodden for their bodily suffering is the bodily suffering of Christ, and when we are passive in reacting to that suffering, we are active in crucifying Christ. But when we are active in relieving their suffering, we are also active in the resurrection; we are saying that the body matters because Christ rose from the dead.

It also means that Christianity is a comedy after all. Christ’s death and resurrection are a preparation that leads to the great wedding feast of the Lamb. Where we will leave our father Adam and mother Eve, our sin, and become one body with Christ. This is the hope of Easter; this is the hope of the resurrection. May we live out this glorious hope here in this good body, waiting for the day when we, as the bride of the Lamb, will participate in that glorious celebration of resurrection.

[1] Ultimate concern is exactly what it sounds like. Faith, or the lack thereof, is determined by the religious or scientific principle one feels strongest about.

[2] Liberal theology, in very good ways, brings us back to the here and now and reminds us to focus on the problems of the world. This is a good thing. Conservative theology has a tendency to look beyond/ignore these needs for the sake of heavenly delight. I think there needs to be more of a balance between the two, a via media, if you will.