Categories Menu
Home » Philosophy » Practicality and Miracles: A Reflection on the Feeding of the Five Thousand 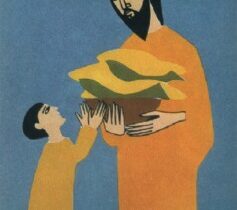 Practicality and Miracles: A Reflection on the Feeding of the Five Thousand 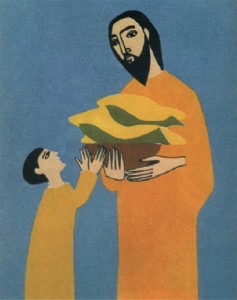 In great fear and distress Jacob divided the people who were with him into two groups, and the flocks and herds and camels as well. He thought, “If Esau comes and attacks one group, the group that is left may escape.” Genesis 32:7-8

Philip answered him, “It would take more than half a year’s wages to buy enough bread for each one to have a bite!” John 6:7

Practicality is an art. To be practical you have to let go of certain things. The first thing you must let go of is the impossible. It is not possible, from a practical standpoint, for me to fly and it would not be practical for me to attempt to fly. But what if I told you that I could fly? Would you believe me? Probably not, because all of us are practical people and as practical people we would have no reason to disbelieve in one of the fundamental laws of nature: birds fly, humans do not. Let’s practice practicality: everyone stand up. Now, I want you to jump and flap your arms. Did anyone fly? No? Congratulations everyone, you just proved science right. Hurray for science!

Practicality makes sense. Birds have hollow bones and feathers; humans do not have such things. Hollow bones and feathers allow for birds to create thrust and stay aloft. Solid bones and no feathers allow humans to play baseball, drive cars, and carry shopping bags. If I were to give my shopping bag to a swallow it could not carry it. Why, because it’s a simple question of weight ratios. If I were to give a crow a baseball bat, again weight ratios. If I were to give a whippoorwill my keys and told it to drive me to the store it couldn’t, why? Well, its legs aren’t long enough. All these things are practical– they make sense. They belong in the overall functionality of the universe. Practicality allows us to function in civilized society. Practical people get practical jobs done and there is nothing worse than someone without any practical experience participating in a practical practice. Imagine if you went to the doctor and you said that your stomach hurt, and the doctor asks you to take off your shoes so he can look at the color of you toenails. I imagine most of us would not return to that doctor. We trust practical people because practical people do not let us down, they have a firm vision of the possible and are able to explain things with brevity and grace. Unfortunately for you, I have never been described as practical, and I am profoundly interested in the color of your toes.

I believe in the beauty of the impossible because I know Scott. Two months after my wife Rachael died in a car crash I went to work with Scott. Scott is 6 foot three, all muscle and severely mentally retarded. Scott loves to sing. There were many nights where he would sit and strum his 3-string guitar and ask me to sing one of two songs: “Santa Claus is Coming to Town” or “Old MacDonald.” Scott would only sing these two songs. If I started singing something else he would have none of it. No Scott would not sing I saw Mommy Kissing Santa, Scott would not sing The Wheels on the Bus, Scott would not sing Oh Susanna, Scott would never have anything to do with such nonsense; Scott would not have any of it. Scott was stubborn as a mule, yet Scott knew of only two animals, a cow and a pig; if I sang horse he would moo, if I sang dog he would oink, if I sang giraffe he would stop playing guitar and stare at me with a look full of wonder and impertinence as if I had created a word unknown to mankind. He would stop playing and wait till I put all this silliness behind me and moved on to the proper animals. After all, who in their right mind would ever accuse a farmer of breeding giraffes? Scott was serious about his singing. When asked what he wanted to sing Scott would think for two minutes then suddenly surprise would come to his face and he would shout “oh, I know” and then list one of the two songs he knew and off we would go again for hours of singing. This is the Scott who saved my life.

I should pause and tell you that I am not that interested in the logistics of the feeding of the five thousand. I cannot tell you how it happened, and that doesn’t matter anyway. I am more interested in why it happened. It didn’t occur because of the child who brought forth the loaves and the fish. The kid was just a player in a role. Yes, we love the child for his simplicity and grace, but the reason why it happened is because God loves to give, not gold and silver, but something grander still: barley loaves and smoked fish.

The days that I knew Scott were full of darkness and despair. In the moments of melancholy, Scott would always come sit beside me uninvited and place his arm around me and hit me on the leg and say “hi” and point to himself and say “Scott.” he would point to me and say “Arec. Hi Arec. Scott. Hi Arec.” he would look at me with his blue eyes and repeat the gesture.  He could not say, “What’s wrong,” he could not say “it’s ok,” he could not say “everything is darkness now but light will overcome.” he could not tell me of love. All he could do is tell me, in his own way, “it’s ok, everything is darkness now, but light will overcome. Love will conquer.”

When one stands at the edge of despair the have two choices: they can turn away to a life full of practicality, or they can jump and hope in the hands that have the strength to grasp them. The patriarch Jacob was one who had wrestled with God. He knew those hands that grasp you, and all he could do is release God from his grasp and let God be God, trusting in the impossible possibilities that not all ruins are deplorable; what is now decimated can once again be filled with laughter and joy.

There was a certain night where I came to know this firsthand. I was driving Scott home from an activity. Melancholy possessed me and I was inhabited by the impregnable specter of loss. In these times I often listened to worship music, letting the balm of David’s psalms wash over my soul, only this night the salve had failed. Despair filled me. I recklessly drove myself further into despondency, feeling the hopelessness of one thrust into the middle of the magnitude of this dark world, and I wept at the sight of impenetrable darkness. Dread clutched at my soul. In the midst of this I heard a voice singing indistinguishable words. In the midst of this I felt a hand upon my shoulder. I looked behind me and there was Scott singing along with songs he had never heard, his body thrown back in pure rhapsody, tongues of fire were dancing on his head. Then, suddenly, his eyes were upon me as he spoke these words: “hi Arec, Scott, hi Arec, hi.

Do you understand? Perhaps I’m not explaining myself properly.

How foolish Philip must have felt holding the fish and the loaves. Just a minute earlier he told Jesus that a year’s wages wouldn’t feed this crowd, and yet there he was taking a partial loaf and a piece of fish to a group of one hundred hungry people. I can imagine their skepticism, eying the food as he brought it to them, what good is a piece of bread to a hundred hungry mouths? What good is a morsel of fish to a man who is drowning?

Jacob woke up with a crick in the neck and a pain in the hip. He had one last knockdown blow-em-up row before he confronted his past, and he now knows that his dancing days are over. No one wants to dance the two-step with a partner who has a bum leg and a new name. Sending all his possessions ahead, all that remains is his family, and what a sitcom family it is: eleven sons, two wives (sisters no less, one loved, one an afterthought), two maids, and a daughter. He knows he is going to his death, a death he no doubt deserves. But on he goes headstrong to the last, believing in the impossible promise of the one whose name he now bears. So, as they cross the ford, Jacob scoops up Joseph in his arms and begins to sing, not a song of lament, but a song of jubilee and for the first time in his life Israel was miraculously free.

Phillip hands the piece of bread to a child and someone in the crowd breaks out some wine. And that is all it took– the feast had begun. Twelve baskets full will be collected at the end and seven more at a later date. Do you still not understand? Let’s be practical about it: there are no such things as miracles, miracles are extraordinary and God doesn’t do extraordinary things. Instead God does what God does, he loves us and provides eternally and sufficiently for all our needs. What we call a miracle occurs when we perceive what our extravagant God is always doing:  sending down tongues of fire to dance on our heads, adopting us into His name, transforming the humble bread and wine into the mercy that lifts us from our despair, that frees us to sing the songs of jubilee as we head in faith towards the unknown.