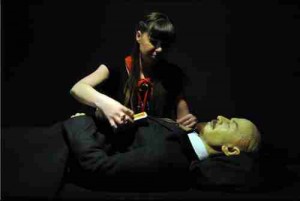 Putrefaction and the Beatific Vision

To remember the dead is, in a certain sort of way, to keep them alive. When we speak of those who have passed through this life, the great men and women of history, we are keeping from death. We create historical narratives in order to justify the importance of their existence. We must do this because the body they once had has been irrevocably changed—decomposition is, after all, the great equalizer.

In order to raise a dead body to the level of a god one seeks to stop decomposition. Ancient cultures practiced mummification; most recently the Communist regimes in Russia and China sought to preserve their leaders Lenin and Mao by embalming them; in Christianity one way to determine if a dead person is a saint is to see how quickly they decompose. In these examples a non-decomposing body becomes something else—it points to the eternal reality that the religion or ideology is promoting.

For the Communists, the preservation of Lenin and Mao points to the permanence of the material reality of the world. Their lack of decomposition is not a religious statement; it is a political one. The state will last as long as the founders last—the body politic is to be preserved as the leaders are preserved: through work and scientific achievement. Both bodies became symbols of the greater ideology; their  basic humanness was sacrificed (decomposition is a universal reality) for the sake of pointing to something greater then themselves—the glory of the state. Thus the symbolic nature of an uncorrupted eternal body, from a Communist point of view, reveals the foundation principle of dialectical materialism: the Hegelian idea that humanity strives towards perfection while nature must decay.

In Christianity, specifically in the Catholic and Orthodox traditions, decomposition points to the corruption of the flesh. It is because of our choices, how we embrace vice over virtue, that our bodies have become corrupted over time. Therefore, the more virtuous one is in this life the less the body will show its corruption after death. Numerous saints have begun on the road to canonization because their bodies have naturally staved off rot. The corruptible body has shown signs of being incorruptible, that which is non-heavenly is displaying the glory of heaven. This is because the saint is experiencing the beatific vision, a direct heavenly experience of God, and that is being reflected through the corpse. Therefore when one views the incorruptible corpse they, in a way, are participating in the beatific vision, they are being divinized with the saint, they are nearing the presence of God. Thus, in the Christian tradition, the symbolic nature of an uncorrupted corpse is not symbolic at all. Instead it is participatory—it draws all who view it towards God. This is why people bring those who are sick to saint’s bodies. They view the body that is partaking in the divine nature as becoming divine itself. This is the doctrine of deification. Therefore if the sick person comes close to the deified body they will be closer to God. Because God is perfection the corrupted sick body will become more perfect by its proximity to the uncorrupted body. To put it another way, because the uncorrupted body is moving towards Christ, it will draw those around it towards Christ. What we can take from this is in the Christian tradition it isn’t the body that is evil, instead it is the corruption (the denial of virtue) of that body that leads to putrefaction.

Why exactly does this matter? It matters because how we view the body will, in many ways, determine how we view the afterlife, as well as how we see our physical selves in relation to the presence of God. A symbolic view of the body will define the body by its function. The body is only good in as much as it can achieve a certain task. Once that task is finished the body can either become a symbol of something beyond itself, Lenin and Mao, or it can decay and become void of any meaning except the narratives we tell about the dead corpse. Thus our relation to the functional body of the other in death lacks, like the body itself, any substance other than what it points to or reveals about the society telling the story.

If, though, we have a positive view of the body in death, like the Christian tradition calls us to, even when the bodies of those whom we love begin to decay, we can participate in the grand scheme of the renewal of all things that began in the death and resurrection of Christ our Lord—one such example is found in The Brothers Karamazov by Fyodor Dostoyevsky.

In the beginning of the novel we are introduced to Elder Zosima, who is considered by most to be the embodiment of virtue. Therefore when he dies it is expected that he will not show signs of corruption even in death. A problem arises when he begins to rot. The characters in the novel begin to marvel at how quickly and pungently Zosima’s decay reveals itself. The protagonist of the novel, Alyosha, is most affected by this change. His faith is shaken, for why would a virtuous man’s body become corrupted in death? Would not immediate bodily corruption be a sign that Zosima was not as holy as was supposed? Dostoyevsky answers these question with an encounter with the risen embodied Christ. But this encounter only happens after Alyosha goes and experiences desolation and grief. It is through this experience that he realizes that he was viewing Zosima purely functional, purely as a symbol, not as a being participating in the great revelation of Christ.

Thus when Alyosha has his vision of the Wedding at Cana, he realizes that the corruptibility of Zosima does not matter in light of the beatific vision that he is invited to participate in. During this vision Zosima invites him to meet Christ in one of the most beautiful passages in the book:

“Do not be afraid of him. Awful is his greatness before us, terrible is his loftiness, yet he is boundlessly merciful, he became like us out of love, and he is rejoicing with us, transforming water into wine, that the joy of the guests may not end. He is waiting for new guests, he is ceaselessly calling new guests, now and unto ages and ages.” (361-362)

What Zosima is saying to Alyosha is that even in bodily decay, Christ is renewing all things, changing the water into wine, transforming our corruptible bodies into incorruptible bodies, by supplying us with his virtue. Therefore we need not approach death and grief with fear; instead we must approach them with the ever-living hope that Christ is renewing all things, drawing all things to himself, transforming them into his image so that our joy may ever and always surpass our grief.