Categories Menu
Home » Scripture » What does it mean to consider the birds? 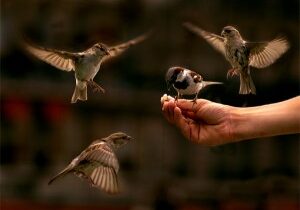 What does it mean to consider the birds? 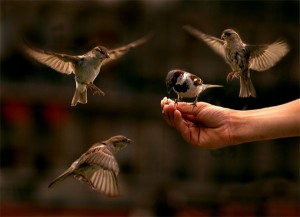 Several people have said to me that in my last post I did nothing but raise questions without offering answers. I had written that we need to think about why we trust the Bible, but I didn’t say what my own reasons were for doing so. To demonstrate why I thought the question so important, I used an example of a Bible verse difficult to interpret in keeping with our experience.

In this post I’m not going to give reasons for trusting the Bible. Instead I’m going to offer my interpretation of Matthew 6, the problematic passage I picked on. Hopefully it’ll serve as a constructive example of how to hold Scripture and Experience tightly together.

This is the Bible passage:

Consider the birds of the air; they neither sow nor reap nor gather into barns, and yet your heavenly Father feeds them. Are you not of more value than they? And can any of you by worrying add a single hour to your span of life? … Therefore do not worry, saying, “What will we eat?” or “What will we drink?” or “What will we wear?” For the Gentiles strive after all these things; and indeed your heavenly Father knows that you need them. But strive first for the kingdom of God and his righteousness, and all these things will be given to you as well.

This is what I previously wrote:

The face-value implication of this saying conflicts sharply with our experience of Christians throughout history who have died of hunger, thirst or cold, despite seeking God’s kingdom. Perhaps we ourselves can also remember a time when we felt we desperately needed something and our need was not met.

In seeking a constructive interpretation of this Bible passage, I want to begin by pointing out that it was remembered, recorded, treasured and canonised by the Church in the midst of persecution. Early Christians were ostracised, punished, and occasionally tortured or killed for their faith. Not only that, but Jesus who said those words was later crucified, an event recorded in the same book that contains this saying. So whatever it means, it can’t possibly preclude suffering even to the point of death.

Let’s look a little closer at the analogy Jesus uses. What do we notice by considering the birds? One observation: birds die of cold and starvation as often as humans. There’s not much difference (in the end) between the safety of a bird and of a human – except that we go to a lot more trouble to try and keep ourselves safe. In neither case is safety guaranteed, so Jesus cannot be guaranteeing our safety by comparing us to birds.

So what’s the big deal? Is Jesus just saying that it’s pointless to worry because worrying won’t change anything? I don’t think so. I think Jesus knew that while our own interests are our priority, we will be powerless to stop worrying about the future no matter how irrational it may be. Instead, I think Jesus is saying that if we “seek first the Kingdom” then we become part of a bigger story in which we’re not the centre. If we submit to God’s rule, it means our security is no longer our highest concern. We become his agents whom he can use however he wants. To become obedient to God’s commands is to give up our deeply rooted instinct for self-preservation and self-promotion, and to go obediently on whatever dangerous/seemingly hopeless quest he may send us on. He will ensure that we have all we need – in order to fulfil his purposes for us.

But why should we submit to God’s rule instead of looking out for ourselves? Why should we trust that we’ll be better off by doing so? I think Jesus addresses this by referring to God as our “heavenly Father.” Jesus saw God as a king who treats his subjects with the same loving compassion that a father has for his children. If we make God’s concerns ours, then God will make our concerns his. How can that be comforting if we look at the way God treated his own son? We have to read to the end of the story to know that.

Whether or not we trust this passage by seeking God’s kingdom first may not change our circumstances. But it can so dramatically change our way of understanding them that our experience of them does change. To trust Jesus is to enter a world in which absolutely everything that happens to us can be seen as coming from an all-wise and loving father who has our best interests – and the whole world’s – at heart. You may think that this is not much comfort if what happens to us is the same. I reply that it is the only real comfort that is not self-deception. What could be more different than a dentist’s chair and a torturer’s, even if the pain inflicted was identical? Or how many of us would willingly endure ten times more suffering if we knew it was (somehow) saving other people’s lives – in other words, if we were sure that it had some kind of meaning attached to it?

To hold on to belief in a loving Father God who is in control is not easy at the best of times, but is particularly hard when circumstances are not the way we want them to be or when we look at the trouble our world is in. To our modern minds it can feel logically impossible. But it is coherent and can be interpreted to fit our experience. Without offering any proofs, the words of Jesus invite us into a new way of being that transforms our experience and brings hope amidst even the greatest despair. If we can learn to believe these words wholeheartedly, then our lives will become as free of worry as the birds.