Rats, Words, and the Human World 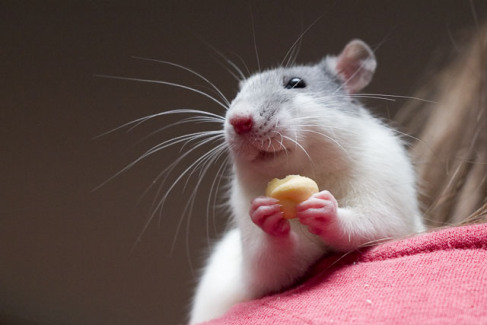 In 2010 Radiolab ran a story on words, the first act of which was titled “Words that Change the World” (if you don’t know what Radiolab is, you should check it out—it’s awesome). During the story they related an experiment (of course involving rats) that revealed some interesting things about the role language plays in our lives. In the experiment, a rat was placed in a rectangular white box, and food was hidden in one corner. The rat was shown the food, then spun about so it no longer knew where the food was. It was then supposed to go to the corner in which the food had been placed. However, given that the walls were all white, the rat had no way to orient itself and it only headed to the correct side of the room about fifty percent of the time. The experimenters then painted one wall blue, and you’d expect that this would have solved the rat’s orientation problem. It didn’t. Rats can do color, and they can do direction, but they can’t put the two together.

Later, someone did the same experiment with children, with the same results. Around six years of age, however, right about when children start to be able to use language in conceptually complex ways, something clicked—the children were able to put right, left and blue together. A whole new relationship to the world opened up.

I relate this story because it connects to a very deep insight that runs throughout much of the Western philosophical tradition (though rarely made explicit until the 20th century): the words of humankind are our world. We don’t simply have a given, easily accessible world that we approach with our senses and then label post hoc. Rather, our words shape the way we see the world, the way we know it. Imagine yourself in that room with the one blue wall. How explicitly would you think about the elements involved? Would you think, “I label that wall blue, and I label that direction right, and the blue and the right are the same thing… etc, etc.” Of course not. Likely you’d barely consciously think of it at all. Nevertheless, words, your capacity for language, would be shaping your interaction with the world the entire time. For human beings, words are our world.

For this reason, the nature of our language, particularly in regards to how it relates to the external world it defines, has all kinds of implications for how we know the world. In a way, for human beings language is a deeper reality even than matter. Once we develop language, our words experientially precede our encounters with matter. This needn’t mean raw subjectivity and deconstruction—that is a question left open to our analysis of language. Plato, for example, thought that both words and matter are what they are in virtue of some higher reality, giving language an objective grounding; and almost anyone would agree that, regardless of where the experiential priority lies, there is a reciprocity between language and matter. To reference back to Rachel’s post, there is a fusing of “horizons.” Regardless, understanding language is key to understanding our world.