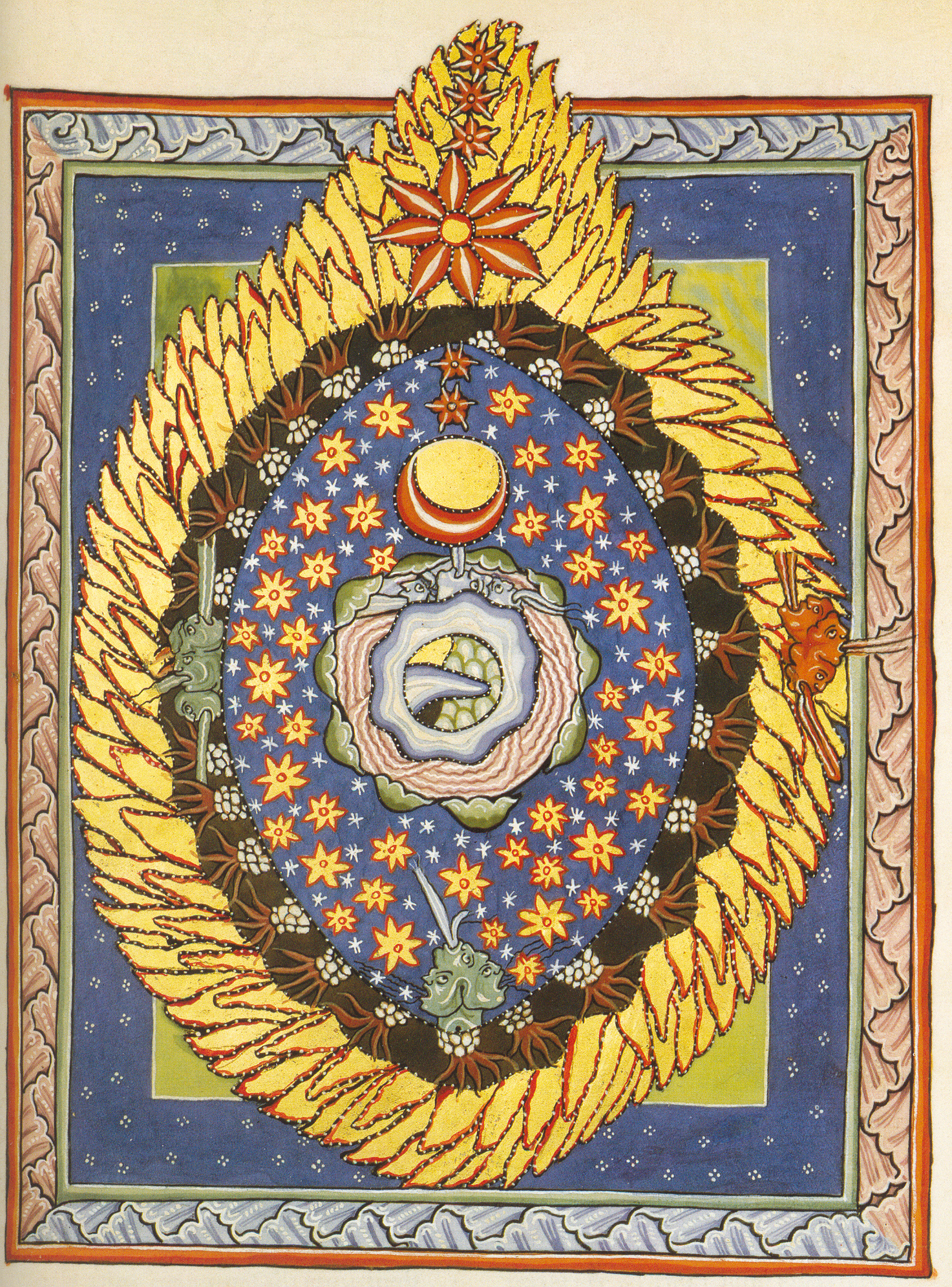 Hildegard of Bingen (1098–1179) was born as the tenth child of an honorable family in a town to the northwest of Worms. She was handed over to the church at the age of ten to the hermitess Jutta, who taught Hildegard to read Latin, chant the Office and live out the Benedictine Rule.

Throughout her life Hildegard experienced mystical visions alongside severe bouts of illness, but it was not until her later life that she experienced her prophetic call. In 1141, at the age of 43, she received a vision where she is called by a voice from heaven to share what she sees and hears in her subsequent visions. This call is recorded at the start of Scivias along with the infamous image of Hildegard sitting to write with pentecostal flames dancing on her head: “‘O human, speak these things that you see and hear. And write them not by yourself or any other human being, but by the will of Him Who knows, sees and disposes all things in the secrets of His mysteries.’”[1]

Scivias is made up of three books, each accounting for a major motif in God’s redemptive story. Hildegard employs an interpretative strategy for her visions similar to allegorical readings of the Old Testament where she moves through the vision piece-by-piece building a theological account. She uses Scripture, notably often the older testament, to explicate on her interpretation. Each of her visions includes both a descriptive account of what Hildegard saw as well as an artistic rendering of the vision.[2]

Hildegard is an exceptional figure for a number of reasons. Firstly, she is possibly the first and no doubt one of the most influential female Christian writers of the Church. In the twelfth-century Hildegard was a rare woman, not only reading and writing in Latin but also travelling throughout Europe giving spiritual direction and even receiving the seal of approval from Pope Eugenius III for Scivias. Secondly, Hildegard speaks of theological truths through profound first-hand mystical experiences, in many ways ushering in a rich tradition of female mystical writers including Julian of Norwich and Teresa of Ávila. Thirdly, Hildegard offers a unique way of doing theology. Through descriptive visions and robust theological interpretation, Hildegard gives new images, metaphors and language for long-held claims of Christian dogma. Finally, Hildegard not only wrote theological works, but also contributed to the field of medieval medicine and composed music that continues to be appreciated into the present.

Hildegard offers us fresh language and images for expressing and exploring long-held theological truths. She offers another horizon for conceiving of God the Creator of all things, standing outside all things, upholding all things. She envisions virtue through mirrored souls reflecting the heavens, envisions redemption with golden hues, and all the cosmos in the shape of an egg. Hildegard and other oft marginalized voices of the Church throughout the ages challenge us to expand our grammar of faith and our theological imagination. Only recently has the Catholic Church recognized her value and little theological work has been done on her thought that envisions the same sort of theology we find in other medieval greats like Thomas and Bernard of Clairvaux. So take this post as a challenge to read, be challenged, vexed and inspired by Hildegard’s writings, visions and compositions.

[2] The descriptions themselves are Hildegard’s own, but it the artistic renderings were supplied by an unknown artist under Hildegard’s supervision and approval.