Recently on public radio’s Science Friday, host Ira Flatow interviewed psychologist Dr. Carol Dweck. The interview was centered on a recent study exploring “innate genius” and the impact that emphasis on genius has on the gender ratio in certain academic fields.[1] Innate genius is the raw talent, the “it” factor, that one possesses for a particular field of study (e.g. in the fictional world Flatow references TV’s Gregory House or Sherlock Holmes). An alternative to emphasis on “innate genius” would be an emphasis on sustained hard work that over time allows someone to excel in their field of study.

The study that Flatow and Dweck reference is “Expectations of Brilliance Underlie Gender Distributions across Academic Disciplines.”[2] In this study, the researches pose the question: is there a relationship between fields that emphasize innate genius and the ratio of women that are found in those fields? The results of this study suggest that in fields that emphasize genius—philosophy is the most genius-focused discipline they studied—a considerably smaller number of women are found completing PhD’s, whereas in fields that emphasize prolonged hard-work over time—education is on the opposite side of the pole from philosophy—a significantly more saturated representation of women are present. 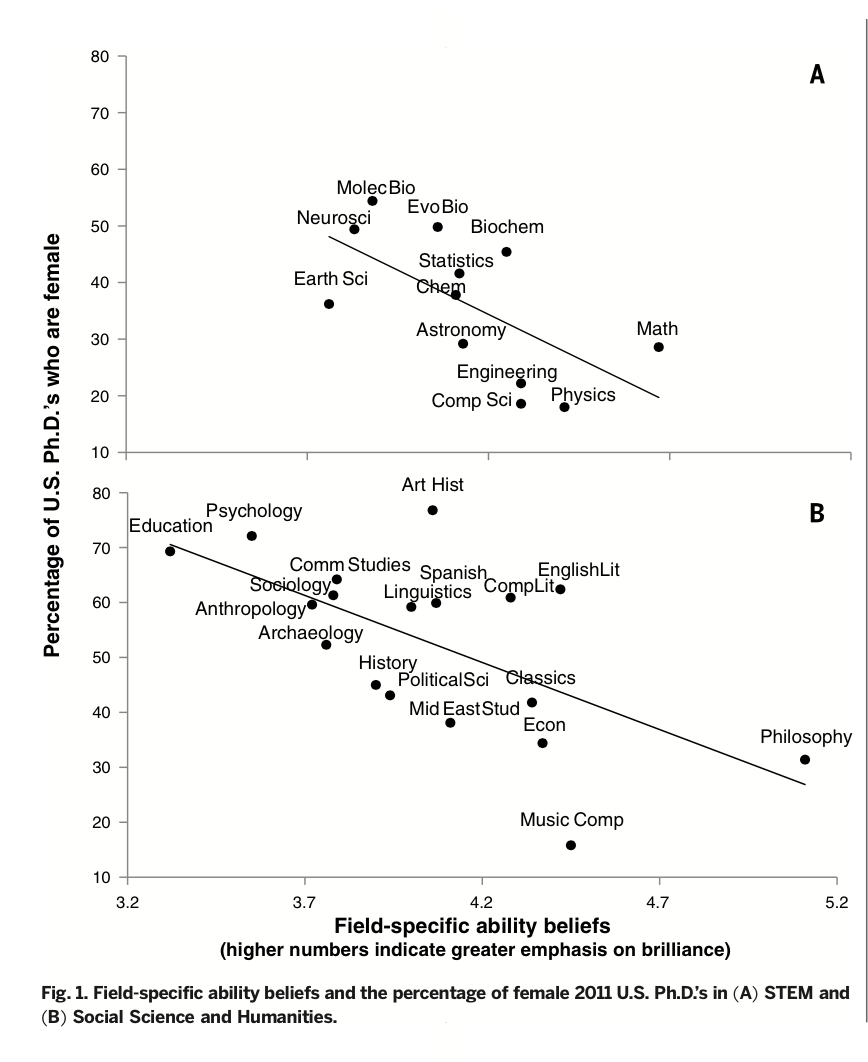 Notably, similar results are found when looking at African Americans and Asian Americans completing degrees in the same areas.

At the end of the study, the researches ask

Is natural brilliance truly more important to success in some fields than others? The data presented here are silent on this question. However, even if a field’s beliefs about the importance of brilliance were to some extent true, they may still discourage participation among members of groups that are currently stereotyped as not having this sort of brilliance… The extent to which practitioners of a discipline believe that success depends on sheer brilliance is a strong predictor of women’s and African Americans’ representation in that discipline.[3]

The Science Friday interview picks up where the conclusions of this study ends. Dweck explores the possibilities for the small numbers of women in the innate genius disciplines: “When a field says some people have it and some don’t, the women start thinking are they putting me in the don’t category. Women may feel less welcome in those fields and stay away from them.” Those same fields are those that “self recognize as being less welcoming to women.”

Dweck goes on to highlight that women tend to want to stay away from the competition of the innate genius fields. This final point of Dweck’s is important because she does not wonder whether genius itself is a gendered category, but rather if the culture created around the idea of genius is a distinctly non-welcoming one to women.

I began listening to this interview as I drove to the grocery store and by the time it finished I found myself sitting in my car in a bustling parking lot measuring my own experience against the research found in this study. If philosophy find itself far along the spectrum of “innate genius” then might if be fair to deduce that theology might also be a field with this emphasis? Working backwards, it is glaringly obvious that there is only a sprinkling of female theology doctoral students in my program, which stands in stark contrast to the more even-handed representation in my colleagues in biblical studies. In fact, the number of women that even apply to this program (and other similiar programs) year-after-year is significantly smaller than other fields. I would guess that some (maybe even most) years, female theology applicants fall under 10% of the male-dominated applicant pool.

And, with all that said, I find myself in a place of wanting to ask the same sort of questions that were asked in the conclusion of the study: does theology belong on the innate genius end of the spectrum? Does this help explain the lack of women in the field? How much do other factors also play into this underrepresentation? How might theological “genius”–if it does exist– be reformulated to be less male-centric? More generally, how do we begin to encourage participation and make genius a less gender-exclusive attribute?