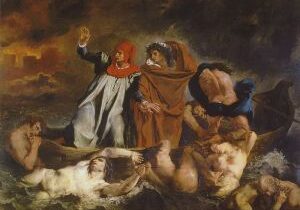 This is the second guest post written by Michael, friend of Many Horizons. His first post can be found here. 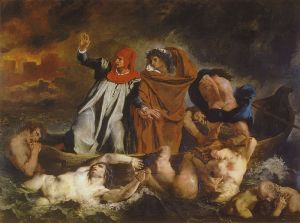 The question of whether morality depends on belief in God often arises in debates between Christians and atheists. For popular Christian apologist William Lane Craig, the answer is simple: “if God does not exist, then morality is just a human convention … subjective and non-binding.”[1] Craig then proceeds to argue that if we want an objective morality, we need to believe in God. But although I appreciate his motives, I am concerned by how Craig uses hell, monsters, and nihilism to make his argument.

First, Craig discreetly mentions that belief in God ensures “evil and wrong will be punished.” That is, because those who do evil may escape worldly justice, only the threat of divine justice can deter wrongdoing. But even for Christians, this is the wrong motivation. In Augustine’s words, “the man who only fears the flames of hell is afraid not of sinning, but of being burned.”[2] In other words, sin should be shunned for its own sake, not because of a fear of punishment. As for atheists, the idea of hell is usually a reason to reject Christianity, because a God who tortures people for eternity appears just as evil as the earthly torturers we hope to deter. Therefore, the claim that we need hell to motivate good behaviour is both untrue to the Christian tradition and unlikely to convince the skeptic.

Second, Craig suggests we need arguments to convince the moral monster. Specifically, Craig highlights the atheism of the Soviet state torturers, and then asks “what do you say to someone who concludes that we may as well just live as we please?” However, if we were actually trying to reason with a torturer, it seems unlikely he would be impressed by arguments about God, hell, or morality. As Candace Vogler points out, “surely the fiendish man’s ‘error’ … goes all the way down to mistakes about principles rather than remaining at the more benign level of ignorance … it is hard to see why one would expect principles of inference to carry him along reliably when moral principles leave him cold.”[3] Thus, even if we had an ironclad rational argument that torture was objectively evil, immoral, and/or certain to be punished by God, all we would have proved is that the torturer is irrational, at which point we might as well use force to subdue him instead of arguments.

Third, Craig insists such moral nihilism is the inevitable result of atheism. He vigorously attempts to demonstrate there is no rational reason for atheists to condemn the Holocaust, sacrifice for others, or uphold human rights; yet he also asserts “the existence of objective moral values serves to demonstrate the existence of God.” But Craig can’t have it both ways. Either morality exists independently of our beliefs, and even atheists can recognize it; or morality depends on belief in God, and only Christians can maintain any moral system. This contradiction could be avoided if Craig admitted atheists need not be nihilists, or gave an account of how reason and revelation relate, but he does not. Instead, Craig takes the corrosive strategy of arguing atheists are irrational to practice altruism or compassion, and by doing so he demolishes any possible shared morality or intellectual sympathy between Christians and atheists.

Yet although I find these features of Craig’s argument deplorable, I understand why he takes this approach: to reassure Christians. In our secular age, belief in God is no longer the default option, but just one among many, a situation that encourages questions about the need for belief.[4] In particular, Christians are prone to worry that if Christianity is primarily about morality or ‘being a good person’, and a similar system of ethics can be justified without reference to God, then why bother with faith? This underlying anxiety is, I suspect, why Craig paints such a hellish portrait of torture, genocide, and nihilism without God. But if the goal is demonstrate why belief matters, I see much more promise in a discussion of how Christian ethics differs from other ethics in its premises and conclusions. For example, does Christian theology inform our perspectives on gender, immigration, or inequality? Should the Christian sacraments shape our attitudes towards abortion, euthanasia, or genetic technology? Does Christ’s crucifixion tell us something about self-defence, torture, or capital punishment? Of course, answers to these questions involve explicit Christian beliefs – that’s why they make the answer to the titular question obvious. If Christian ethics depends on Christian theology, then belief in the God revealed in Christ Jesus matters. But if all we want is a generic objective morality, then the Christian God is unnecessary; the gods of Plato, Aristotle, and Kant will do, or perhaps none at all.

[1] All quotes from Craig are from his essay “Can We Be Good without God?” available online at http://www.reasonablefaith.org/can-we-be-good-without-god

[4] Charles Taylor describes these conditions of secularity well in his massive monograph A Secular Age.

Michael began his bachelor's degree in science at The King's University College, completed a master's degree in theology at Regent College, and is now a doctoral student in theology at Regis College. Aside from a certain similarity in names, all three schools inculcated an appreciation for philosophy, in which Michael continues to dabble while working towards a dissertation on the ethics of enhancement. When he's not studying, Michael enjoys biking in Toronto traffic, watching speculative television shows, and playing board games with his wife Irene.

Latest posts by Michael (see all)