Categories Menu
Home » Creation » Salvation is not the point. The point is what we do with Salvation. 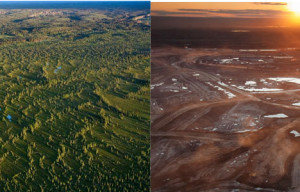 Salvation is not the point. The point is what we do with Salvation.

At this moment a 450 ton, 385 foot long, monstrosity of mining equipment is parked in southern Idaho. This so-called “mega-load” is headed for the tar sands oil operations of Northern Alberta and thus has another 1300 miles to travel before it is used in the most energy and water demanding mining process in the already-black history of oil drilling. A profoundly well argued critical analysis of the dangers and costs associated with the mega-loads can be found in David James Duncan and Rick Bass’ The Heart of the Monster. Sitting here in Idaho, the local papers document, rather, the crawling 60 mile-per-day progress of the load: mostly to inform us about the impending traffic closures.

The Christian community has responded in its typical fashion—with silence: silent about the tar sands, silent about our backyard mega-load corridor, silent about clear-cutting, dam building, and fracking—silent. Christian political discourse in this county has become so warped that you would think God cared more about stopping gay folks from having sex than he does about loving your neighbor, or he cares more about picketing abortion clinics than he cares about what you do unto others. Regardless of how important or unimportant gay marriage or abortion are to the Christian witness in the world today, there is vastly more to this life that God created, which we have been called to minister to.

Of all the thousands of organizations dedicated to the protection, preservation, or restoration of the creation in whole or in part, only one is Christian, and yet on the first page of our Holy Scriptures is an account of God, not making heterosexual sex or outlawing abortion, but creating a world that was not himself, a creation that had a life of its own in relationship with his Spirit! All this laid out before the appearance of humanity from the dust of that very creation. Arguments for why Christians should value and care for creation are well documented, but as mission to a broken world, we are failing.

As Jürgen Moltmann points out, Christian mission is a kingdom mission, not a soul saving mission: “‘Seek ye first the Kingdom of God and His righteousness’; then the living community of God’s Spirit will fall on your lot simply of itself.” Practice, act, do, actively good kingdom things and the Spirit will come.

Kingdoms, appropriately enough, include far more than just vassals, knights, and serfs. Kingdoms, as the British still experience, include forests, pastures, livestock, fields, wild game, and yes, even Salmon and trout (as robustly evidenced in Scotland’s archaic Salmon fishing regulations . . . not that I’m bitter). The king owns it all and to poach wild game from his woodlands is theft from the king himself. In this, the time of fracking and tar sands, the time of climate change and desertification, the time of trash islands and GMOs, we are witnessing the greatest act of thievery against the king in the history of this world. With Christians practicing silence on these issues rather than practicing kingdom, where is the Spirit moving?

If money changers and dove salesmen in the Temple could incite the fury of Christ, how much more so, the mega-corporations and plastic peddlers thieving and destroying the cosmic temple of God’s own making? It is time to be angry.

Christians aren’t very good at being angry. Instead of anger, we tolerate or quietly approve. We like having our money changed, buying doves, having cheap-ish petrol, not worrying about garbage, collecting cheap plastic furniture, etc. We like it when the national economy is productive, when goods are disposable, incomes are high, and work is easy. We like being collaborators in the greatest heist in history. We like this collusion. This is why we aren’t angry with the systems of creation degradation.