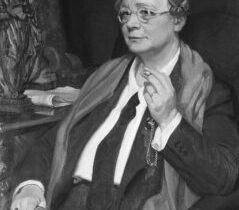 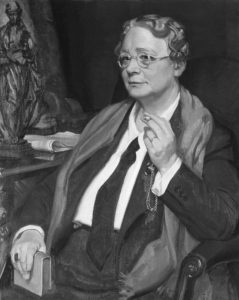 In 1938, Dorothy Sayers addressed a society of women on the issue of feminism. This address came twenty years after the Representation of the People Act of 1918 which granted voting rights to a limited number of women over 30 years old and ten years after the Representation of the People Act 1928 which granted the same voting rights to women as men. Sayers, a public intellectual, TSA fashion lover and writer was well versed in the Suffrage Movement and the inequality in all levels of society for women.

Those in the audience may have expected an amiable lecture on the merits of feminism in light of the recent successes and continued struggles for the feminist cause. Those expectations, though, would have been shattered as Sayers begins her address:

When I was asked to come and speak to you, your Secretary made the suggestion that she thought I must be interested in the feminist movement. I replied—a little irritably, I am afraid—that I was not sure I wanted to ‘identify myself,’ as the phrase goes, with feminism, and that the time for ‘feminism,’ in the old-fashioned sense of the word, had gone past. In fact, I think I went so far as to say that, under present conditions, an aggressive feminism might do more harm than good. As a result I was, perhaps not unnaturally, invited to explain myself.
I do not know that it is very easy to explain, without offence or risk of misunderstanding, exactly what I do mean, but I will try.[1]

At the heart of Sayers’ argument is the critique of asserting sameness without a deep consideration of what grounds any claim of equality. Sayers takes on the phrase “a woman is as good as a man” to explicate her point:

What, I feel, we ought to mean is something so obvious that it is apt to escape attention all together, viz: not every woman is, in virtue of her sex, as strong, clever, artistic, level-headed, industrious and so forth as any man that can be mentioned; but, that a woman is just as much an ordinary human being as a man, with the same individual preferences, and with just as much right to the tastes and preferences of an individual. What is repugnant to every human being is to be reckoned always as a member of a class and not as an individual person.[2]

Note well, Sayers is not arguing that issues of class are unworthy of discussion nor that feminism itself is any unworthy cause. But indefensible to Sayers is to treat individuals only as members of a particular class: “What is unreasonable and irritating is to assume that all one’s tastes and preferences have to be condition by the class to which one belongs.”[3] In the extreme enforcement of class, Sayers recognizes the totalitarian state where deep fissures of class (gender, race, socio-economic, etc.) distinction lead ultimately to violence and coercion by the state.

Sayers rhetorical question “are women human?” forces us to recognize the most obvious but often glossed over aspects of discussions of class and rights. Just as feminism is necessary in order to assert that women are due the same rights as men because they are also human, a radicalized version of feminism runs the risk of losing sight of the core principle behind the movement. Sayers reaped too many of the benefits of feminism to reject the goodness of the fight for equality, but in the midst of the good fight she recognized the danger of losing sight of the true prize: an equality that affirms the particularity of being human.

[1] Dorothy Sayers, “Are Women Human?” in Are Women Human? Penetrating, Sensible, and Witty Essays on the Role of Women in Society (Grand Rapids, MI: Eerdmans), 106.