“To hold something with the intellect is not to believe it. A person’s true belief is that by which they live.”
– George MacDonald

“Abram believed God, and it was credited to him as righteousness” (Gen 15:6).

In the Biblical languages, the word for belief equally means trust, faith, and faithfulness. There is no difference in the Bible between these four concepts expressed by the same word. Abram’s faith is noticeable in this verse because it represents a decision to live his life as if what God had said was true – in other words, to trust God and to remain faithful to what God had told him. For Abram as for the rest of the Biblical worldview, “to believe something” meant much more than simply “to think it correct.” The next few chapters of Genesis show what it meant for Abram to have oriented his life this way. 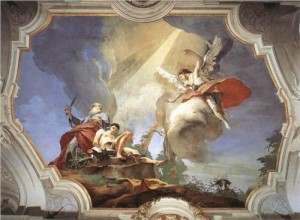 In Western society we tend to have a model of how human beings work that starts with our rational intellect and works its way down to our bodies and practices. This model comes largely from Descartes (with some modifications from Kant) and goes something like this: our conscious beliefs drive our behaviour. So if we want people to behave differently, we need to explain rationally to them why they should. According to this model, the conscious mind of a person is in the driving seat of their life and everything else follows from it. So when we come to the Bible and read about faith/belief, we can easily import our modern Western understanding of these words into our interpretation. This can lead to a view of what it means to be Christian that is focused on what theological opinions we have and ignores the way we live.

But our beliefs are not simply the things we consciously hold opinions about – that is only the entryway to belief, the front door. In fact most of our deepest beliefs – about the meaning of life, our own value and worth, what can be hoped for and lived by – may never have been in our conscious minds. It is those beliefs, however, that form the basis of all our actions, from little daily decisions to huge life-changing choices.

The model of the human person that Descartes taught is too simple. In reality, our beliefs and our practices mutually influence one another. If we continue to live a certain way then it will influence the sorts of things we think are true and meaningful. For example, I may believe theoretically that courage is a good thing, but unless I am trying to be courageous in small insignificant ways in my daily life, then I will probably lose my nerve in a critical moment when courage is really needed. Another example: when I learnt to dance, I found a big difference between knowing what a dance move looked like and being able to do it myself. It wasn’t enough to rationally understand how to do the move. I had to practice it for hours before I could actually do it, and that way I learned something that couldn’t have been learnt any other way. I also gained a new respect for professional dancers that I had never had before. My practices changed my perception of the world, not the other way around.

Why does all this matter? I think it has important implications for the way we as Christians do both Evangelism and teaching. We can often live under the impression that the most important thing is to make everyone hold the right conscious beliefs/opinions, thinking that these will make the difference for our salvation and our daily lives. So we put our effort into persuading people to change their minds about things, and try to ensure that we have all the correct opinions about God and the world. But what if this is not really the most effective way of changing ourselves or other people? I don’t mean that these things aren’t important. I wouldn’t bother to write this to change your opinions if I thought opinions made no difference whatsoever. But maybe their importance can be relativised against other valuable activities and projects.

Our anthropology – our understanding of how human beings work – is a vitally important part of our theology. We must resist being too easily influenced by whatever the prevailing anthropology might be, by making the effort to understand what makes Christian anthropology different. I would highly recommend the philosophy of Maurice Merleau-Ponty as a start. His academic book is Phenomenology of Perception, but he has also written a popular easy-to-read volume called The World of Perception. The Christian author James K.A. Smith has also made use of Merleau-Ponty for our understanding of worship, in his book Imagining the Kingdom.